Between the Impact and the Infinity 4PS PRO, premium peripheral factory Scuf Gaming has been no stranger to highly customized PS4 controllers. Building one from the ground up, however, is decidedly new territory.

The end result is the Vantage ($199, about £156, AU$276), a high-end modular officially licensed gamepad with excellent feel and a slew of customization options, all of which firmly positions this quality accessory ahead of similarly priced pro-controller offerings.

When you get your hands on Scuf’s Vantage, there’s no doubting the unmistakable ergonomics at play. Simply put, it just feels right. The overall build is slightly larger than Sony’s official DualShock 4, and much like the PS4 pack-in controller, Scuf’s peripheral rests comfortably in your hands, making use of some nicely textured, rubberized handle grips.

The Vantage’s bulk (between 256 and 287 grams) is also similar to, if not a little heavier than, the DualShock 4’s, but it’s noticeably lighter than the Razer Raiju Ultimate. You can actually remove either or both vibration feedback motors to adjust the Vantage’s mass at any given time, and it’s as simple as popping off the faceplate and releasing them by hand from the handles—no tools needed.

In similar fashion, almost everything on the Vantage is adjustable or customizable: The analog sticks, which are offset like an Xbox One gamepad and forgo the traditional PlayStation layout of Scuf’s own Impact controller, can be changed between concave, convex, tall, as well as a selection of different colors. 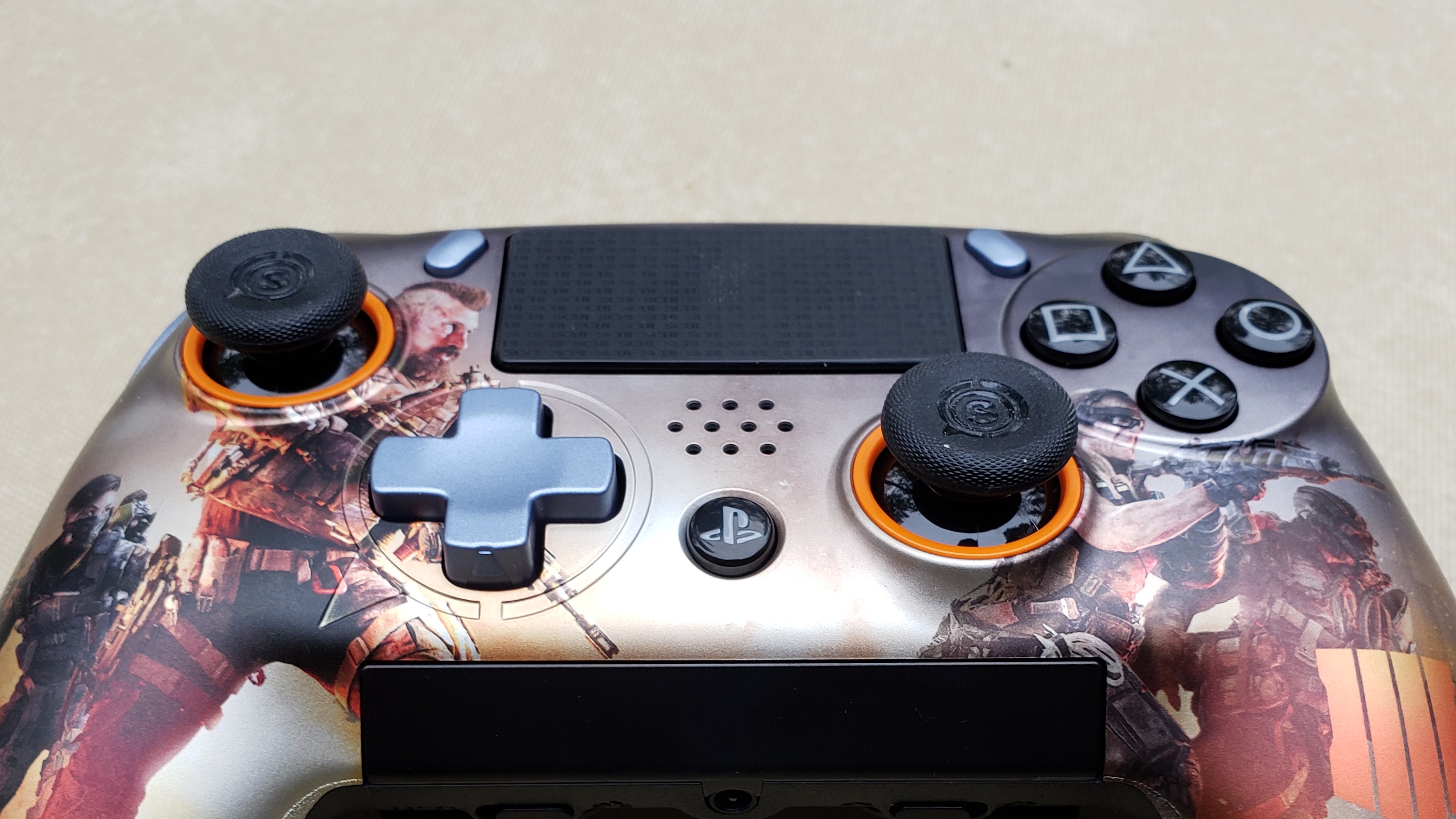 Various unique magnetic faceplates can be pulled off and swapped out on the fly, including a limited edition Black Ops 4 variant, though you’ll need to buy a whole separate limited edition controller to partake in that one (you’re actually better off buying the LE and then purchasing additional faceplates to swap out). Magnetic d-pads can also be switched, either between cross-shaped or disc-shaped.

Moving to the top, shoulder buttons possess a nice amount of give, and the springy back triggers can have their tension, travel and even button lengths adjusted, by which you can simply snap plastic pieces off and on. Then you’ve got your multi-functions: Wedge-shaped proprietary Sax buttons adorn the sides of the Vantage, while the ever-present Scuf paddles, four to be exact, are situated on the backside of the controller.

The last on-board feature is perhaps the coolest and most practical: An integrated audio touchpad, which can be slid to adjust volume and hard-pressed to mute your live microphone. The only downside here is that the headphone jack will only work while the Vantage is in wired mode. Also, note that while the Vantage does have a sort of custom Scuf-themed light bar up front, you’re unable to use the controller with the PlayStation VR. 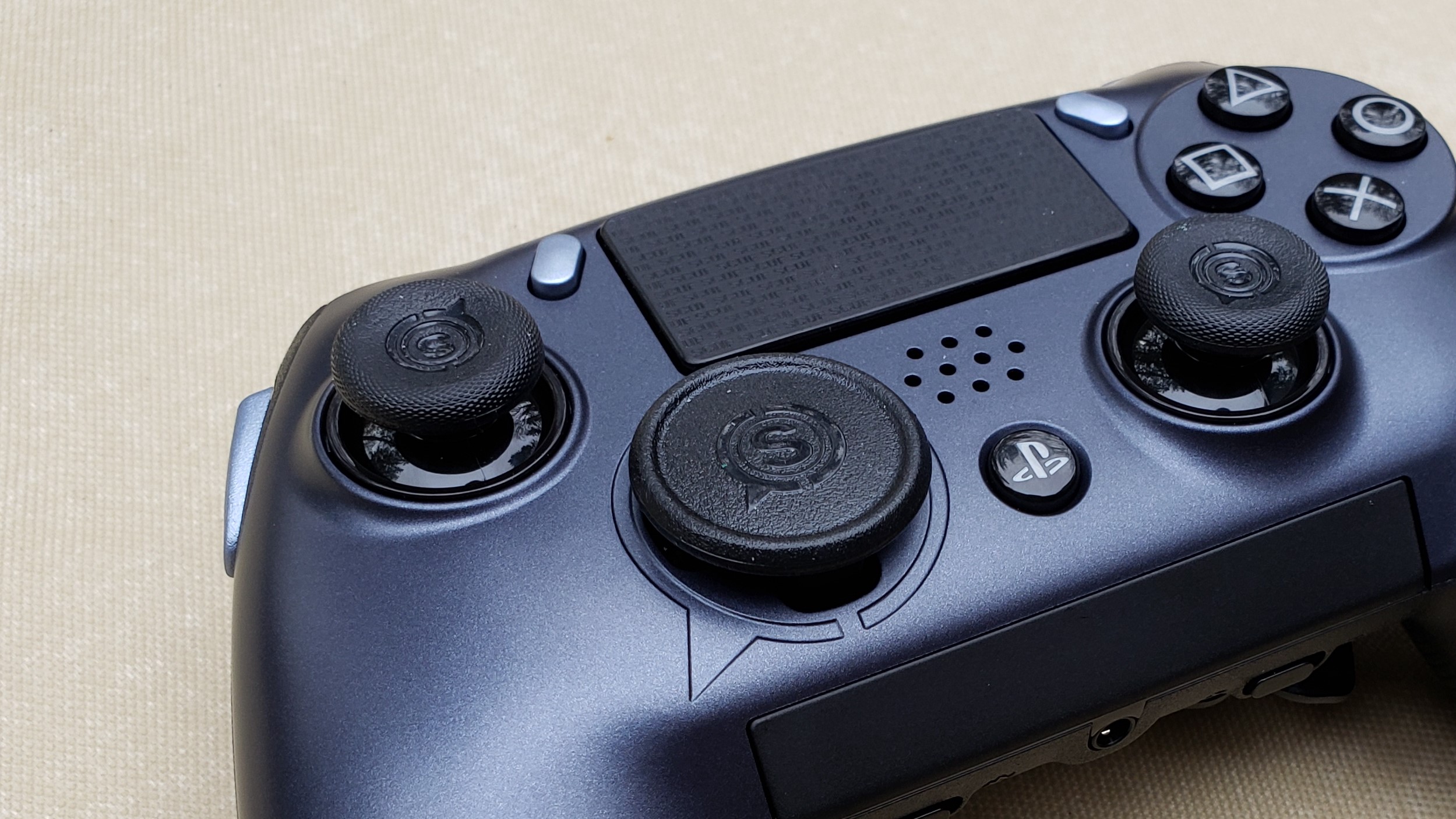 In wired mode, the Vantage performs brilliantly, with practically zero hiccups or latency issues. The included 10-foot braided micro-USB cable allows for plenty of distance between gamer and television and should accommodate most entertainment center setups.

Bluetooth mode, which quickly pairs to either PS4 or PC and is activated with the simple flick of a switch, isn’t flawless but works leagues better than the same mode on Razer’s Raiju Ultimate. As expected, there is some miniscule, albeit noticeable, input lag. Most of the time, it falls into what would be considered acceptable territory, though swapping in a DualShock 4 will readily illuminate the tiny delay.

Luckily, much of this seems to have been remedied with the latest firmware update, so if you’re experiencing issues, make sure to visit Scuf’s support page for the most recent download.

The analog sticks feel absolutely great … that is, when they’re working correctly. Control sticks getting stuck, something that’s been a pesky recurring issue with Scuf’s past controllers, is unfortunately still a problem with the Vantage. It seems to be directly related to the swappable anti-friction rings, analog sticks and faceplates, and depending on how each piece was cut at the factory, control sticks can either move perfectly freely or occasionally get jammed in any number of directions. 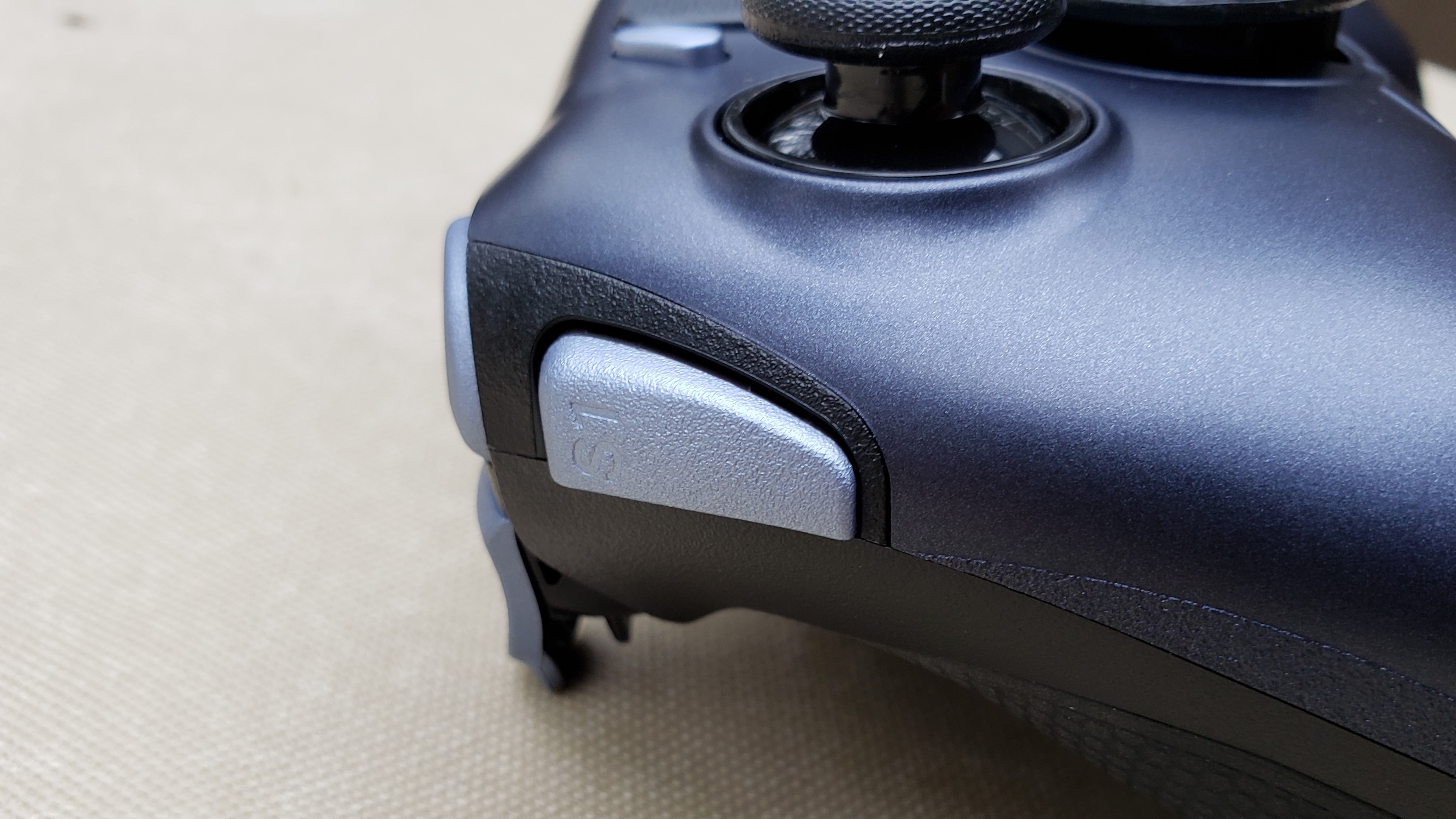 The predicament can usually be resolved by switching out the faulty ring, stick or faceplate in question. It’s really a guessing game, but once you isolate the problem area, it’s relatively easy to fix.

On another control note, the disc-shaped d-pad feels pretty solid, minus an odd springiness that can sometimes distract from gameplay. But the cross d-pad, on the other hand, is way too rigid, almost to the point of being unusable. Fighters are next to impossible while its equipped.

Multi-function button mapping is achieved via a convenient switch along the bottom of the controller, and while a confirmation vibration or a companion app like that of Razer’s Raiju Ultimate would have both been nice, the on-board customization works swimmingly.

The Sax buttons are a love or hate thing, especially depending on your style of play. They’re designed to be accessed via extended index fingers, which isn’t the most natural position, so your mileage may vary. 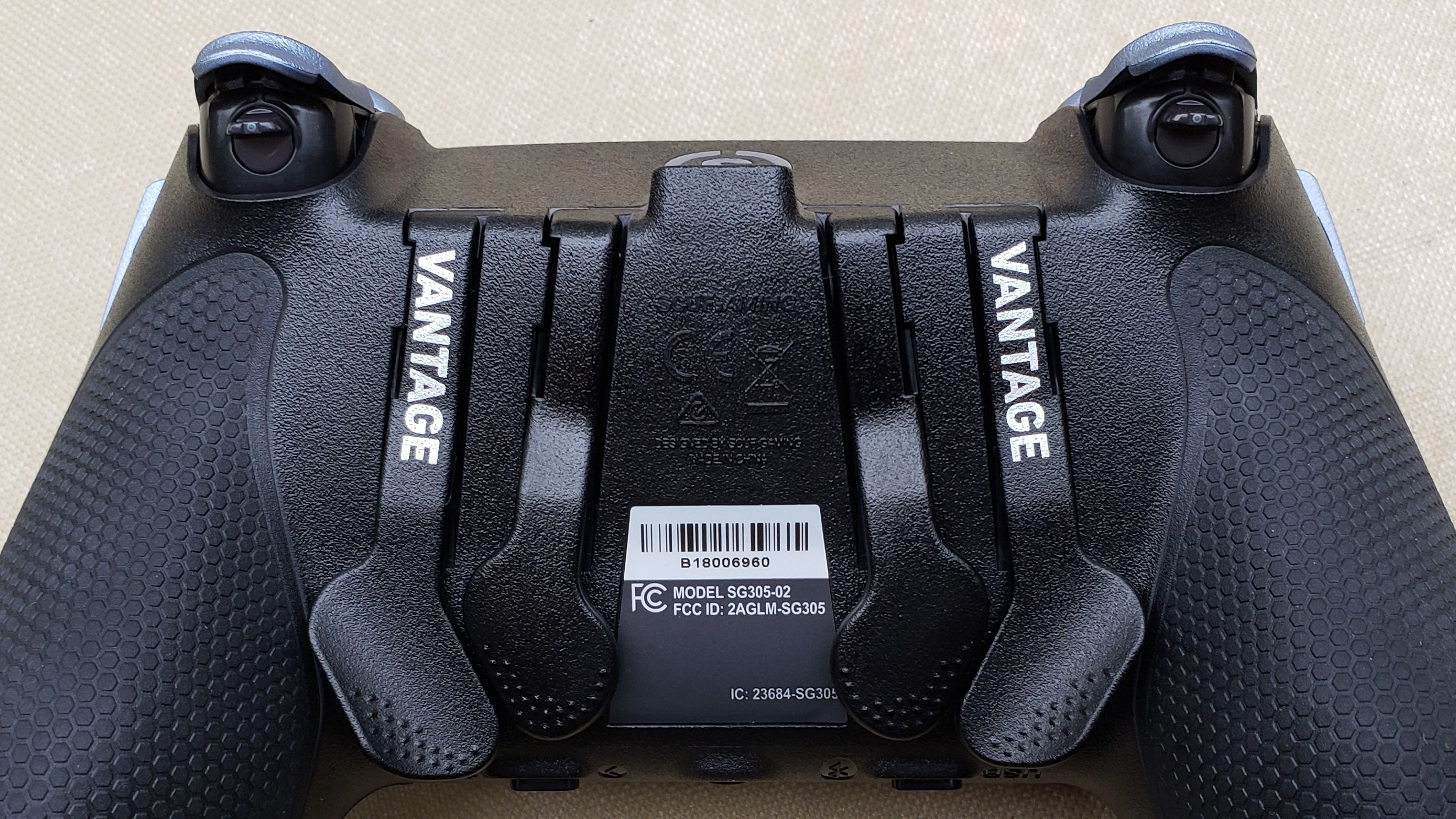 The back paddles, on the other hand, feel excellent and are extremely easy to tap in the heat of gaming. It’s also very rare to accidentally hit one.

Lastly, the Vantage’s standard 1,000 mAh battery is fine, but a larger charging capacity would have been greatly appreciated.

Until Sony decides to jump into the pro-controller arena and release its own premium gamepad, Scuf’s Vantage is a solid choice to reach for in the meantime. Yes, it has its share of issues—including a slightly prohibitive price—but it’s an officially licensed gamepad, and its Bluetooth mode works way better than Razer’s similarly priced Raiju Ultimate, which makes the Vantage one seriously tough premium accessory to ignore.