Samsung is the latest to join the Windows Mixed Reality (MR) milieu with the Samsung HMD Odyssey, essentially a virtual reality (VR) headset running Windows 10. Microsoft – and a digitally-rendered Samsung executive – showed off the new head-mounted display (HMD) at a press event in San Francisco.

Samsung’s new headset is the most expensive in the Windows MR family, coming in at $499 (about £377, AU$635). But, it’s the only one to include built-in headphones with spatial audio, and it will also ship with two motion controllers when it releases on November 6.

Because of the headphones, paired controllers and the headset’s outstanding visuals, the Samsung HMD Odyssey is the most complete device in the Windows MR family. We tried the Odyssey, Acer Mixed Reality Head-Mounted Display and the Dell Visor at Microsoft’s press event (Asus, Lenovo and HP are also releasing Windows MR headsets), and Samsung’s stood head-and-shoulders above the Visor and just edged out Acer’s offering. 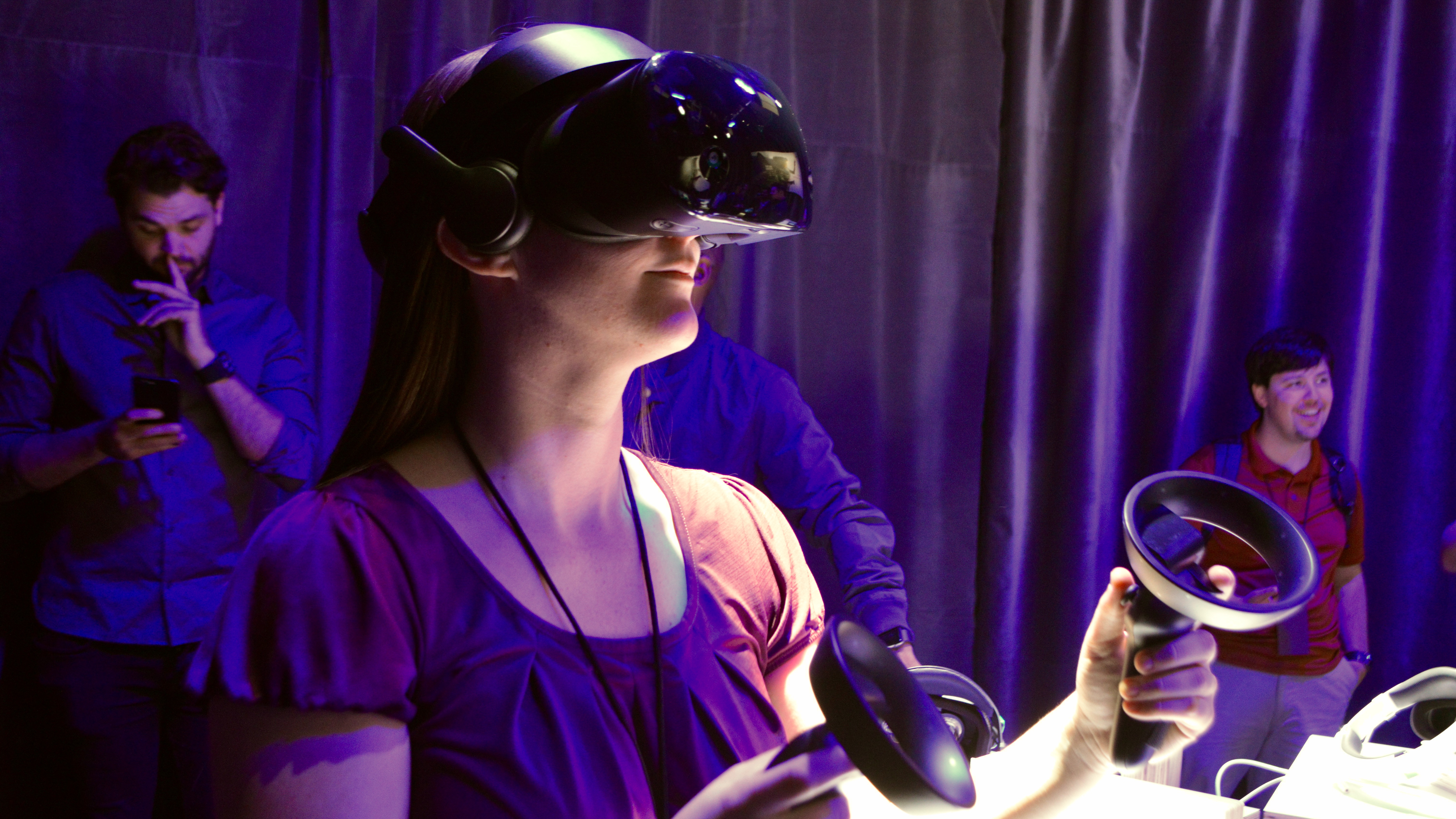 While not exactly on par with the Oculus Rift and HTC Vive in terms of sheer graphics rendering and build quality, the Samsung HMD Odyssey is worth considering if you want to stay within the Windows ecosystem and own a compatible PC.

In a vacuum, Samsung’s newest device didn’t blow me away, but if made to choose between headsets for Windows MR, I would pick the Odyssey to take the journey with.

As far as design goes, the Samsung HMD Odyssey is nothing to get excited about. It’s black with no color accents at all. It bears a close resemblance to the LG SteamVR headset we saw back at GDC 2017, even down to the tiered headband that goes across your forehead.

As far as design goes, the Samsung HMD Odyssey is nothing to get excited about. It’s black with no color accents at all. It bears a close resemblance to the LG SteamVR headset we saw back at GDC 2017, even down to the tiered headband that goes across your forehead.

The visor, more rounded than LG’s, is shiny and, aside from some engravings, that’s the only flair on an otherwise matte black device. 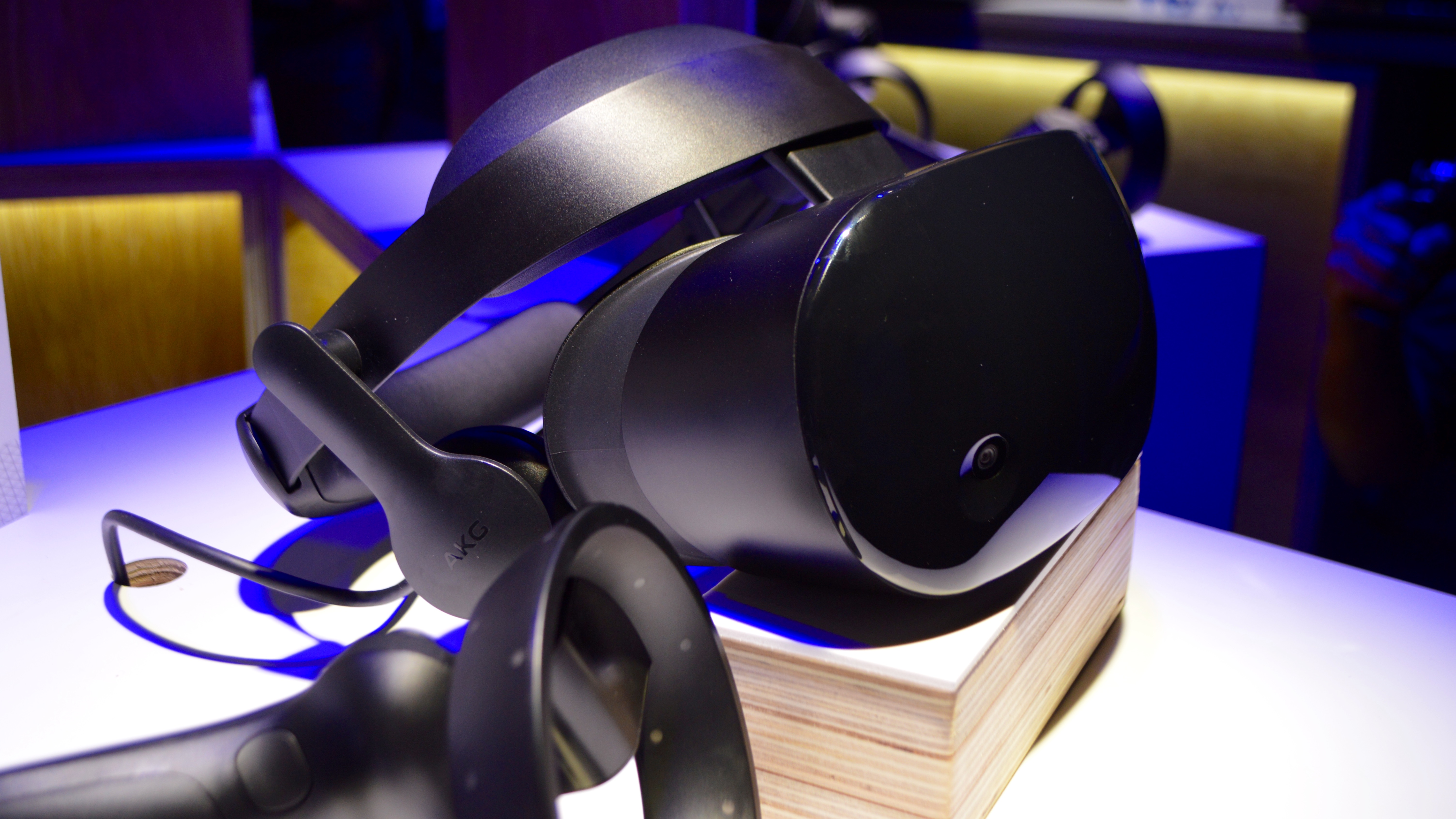 The headset also has a somewhat budget quality to it, which could be owing to its lightweight feel (it weights 645g, or just under 1.5 pounds). To be honest, we weren’t bothered by the inexpensive impression it left, as the headset didn’t feel flimsy or poorly made; plus, it was super comfortable to wear. However, if you’re spending $500 on a device, you may want something that feels a bit more substantial.

The visor doesn’t flip all the way up like Acer’s design, though it lifts up and forward enough for you to slide the contraption easily over your head. To tighten the device, you scroll a little dial on the back. The built-in AKG headphones slide down and, before you know it, you’re immersed in the Windows Mixed Reality world.

As mentioned, the Samsung HMD Odyssey is exceptionally comfortable. It feels as though we could wear it easily for a lengthy period without experiencing neck strain or developing that cinching feeling around the cranium that other headsets tend to induce.

Of the three devices we compared at Microsoft’s press event, Acer’s was the lightest (it weighs 350g), but Samsung’s was overall the most pleasant to wear.

On paper, the numbers seem close. In reality, however, Samsung’s visuals are buttery smooth with an added vividness to the colors that is noticeable. Acer’s visuals were slightly more muted and just a touch more rough. The AMOLED display tech, which Samsung is known for on its Galaxy phones, clearly makes a difference. And, compared to the Dell Visor, which has visuals with a dull and even more pronounced ragged quality to them, the Samsung HMD Odyssey is clearly superior. 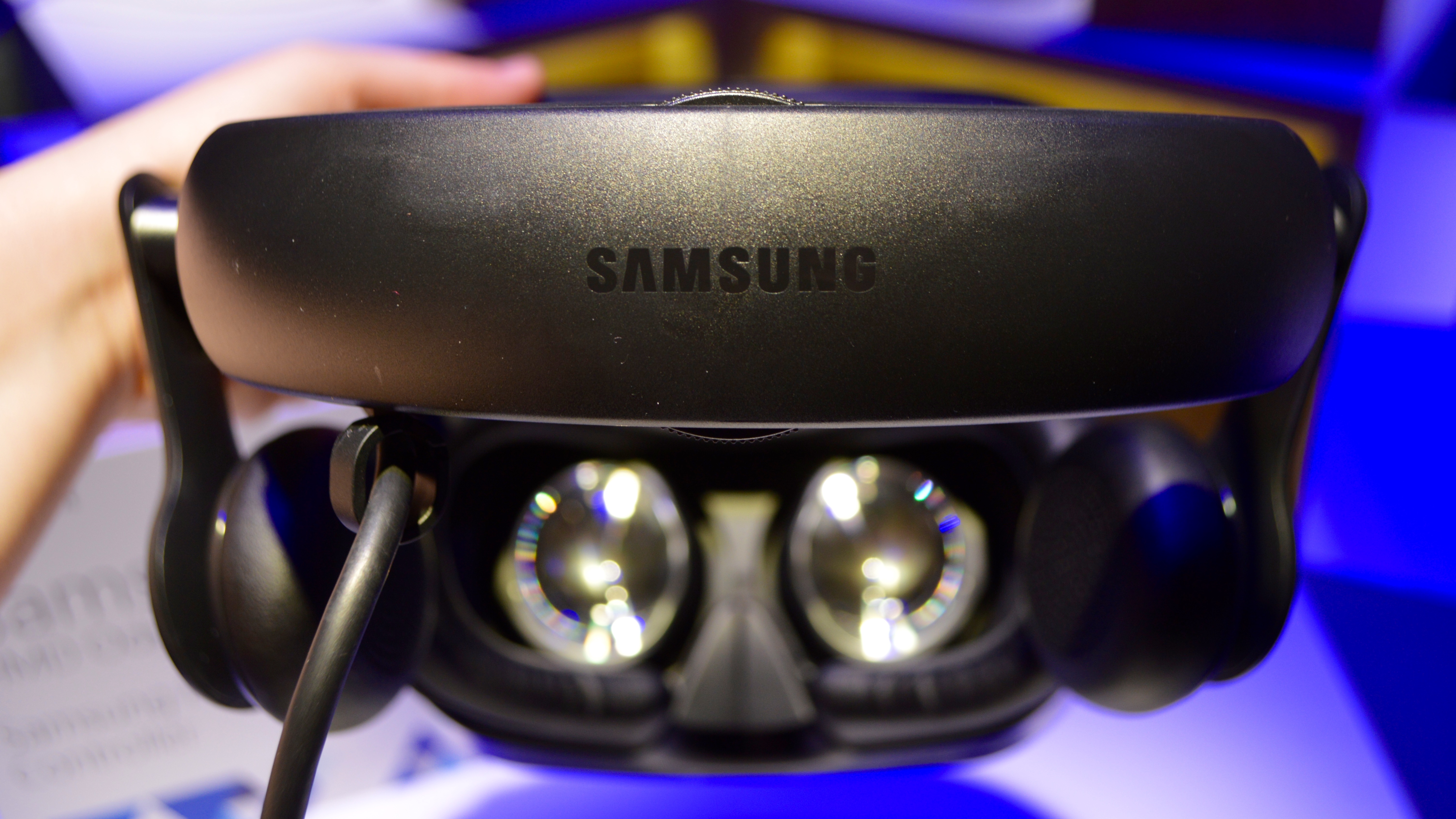 Inside the headset, our demo ran about as smoothly as we’ve seen on any virtual or augmented reality device, with no stutter or lag during the experience. We were taken into the Cliff House, which acts as a home base inside Windows MR from which you jump into different experiences, such as Halo Recruit and Move, a creative app lets you paint in the air using the controllers.

All in all, the controllers work fine, though they aren’t as intuitive to use and don’t feel as good in the hand as the Oculus Touch controller. 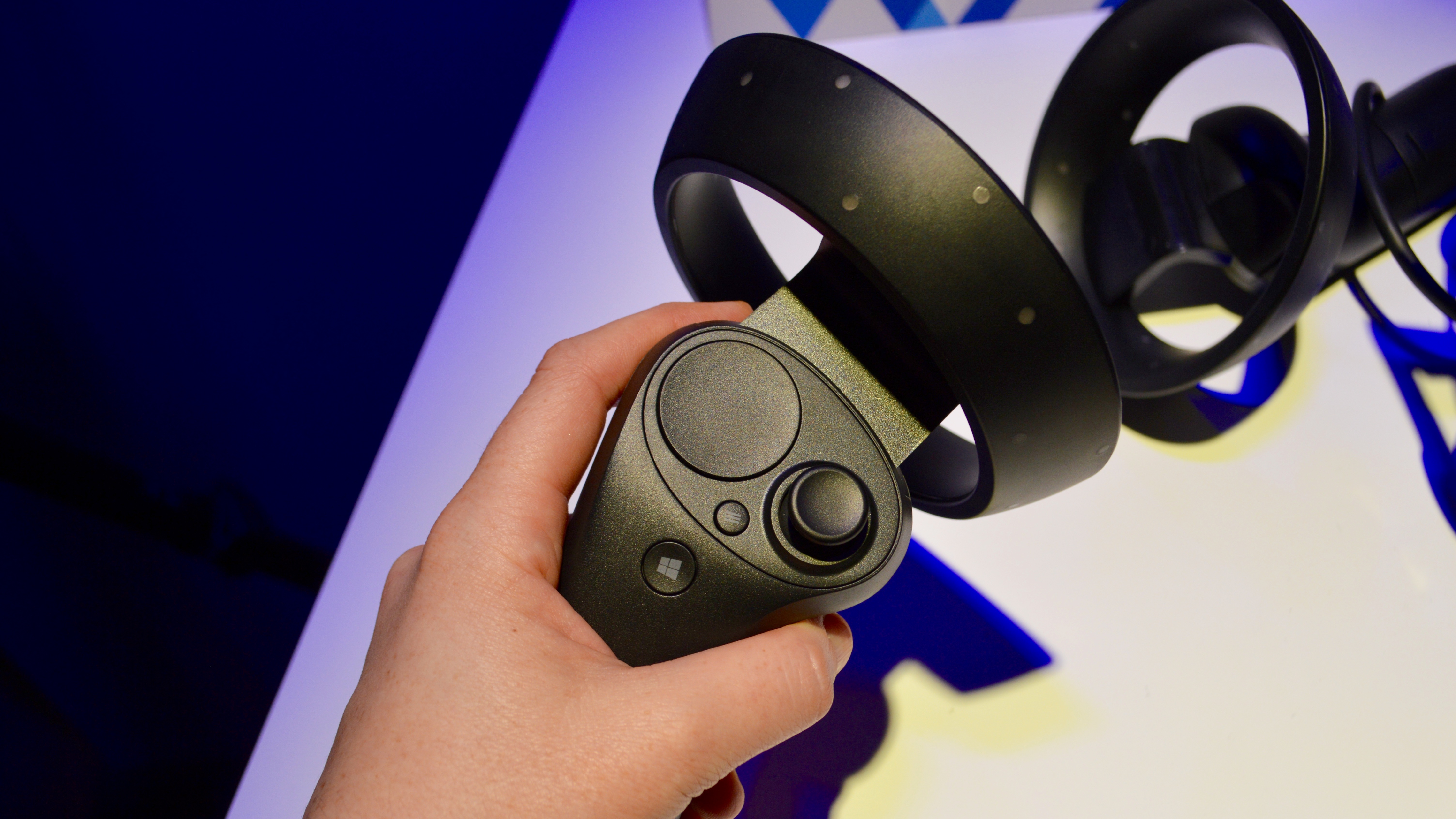 With cameras for six-degrees-of-freedom, or 6DOF, and inside-out tracking built inside the headset, moving around within the virtual world felt natural. You don’t have to worry about external sensors; everything is self-contained, which is one of the advantages Microsoft touts for the Windows Mixed Reality platform over Oculus Rift and HTC Vive.

But, whereas there is convenience in not having to outfit a room for VR, as you do with HTC Vive, thanks to inside-out tracking, HTC Vive’s room-scale Chaperone system is handy at keeping you from running into objects. Windows MR doesn’t have the same ability, and we had to be pulled back from a stand several times, and even bonked it (not hard) with the controller on one or two occasions. 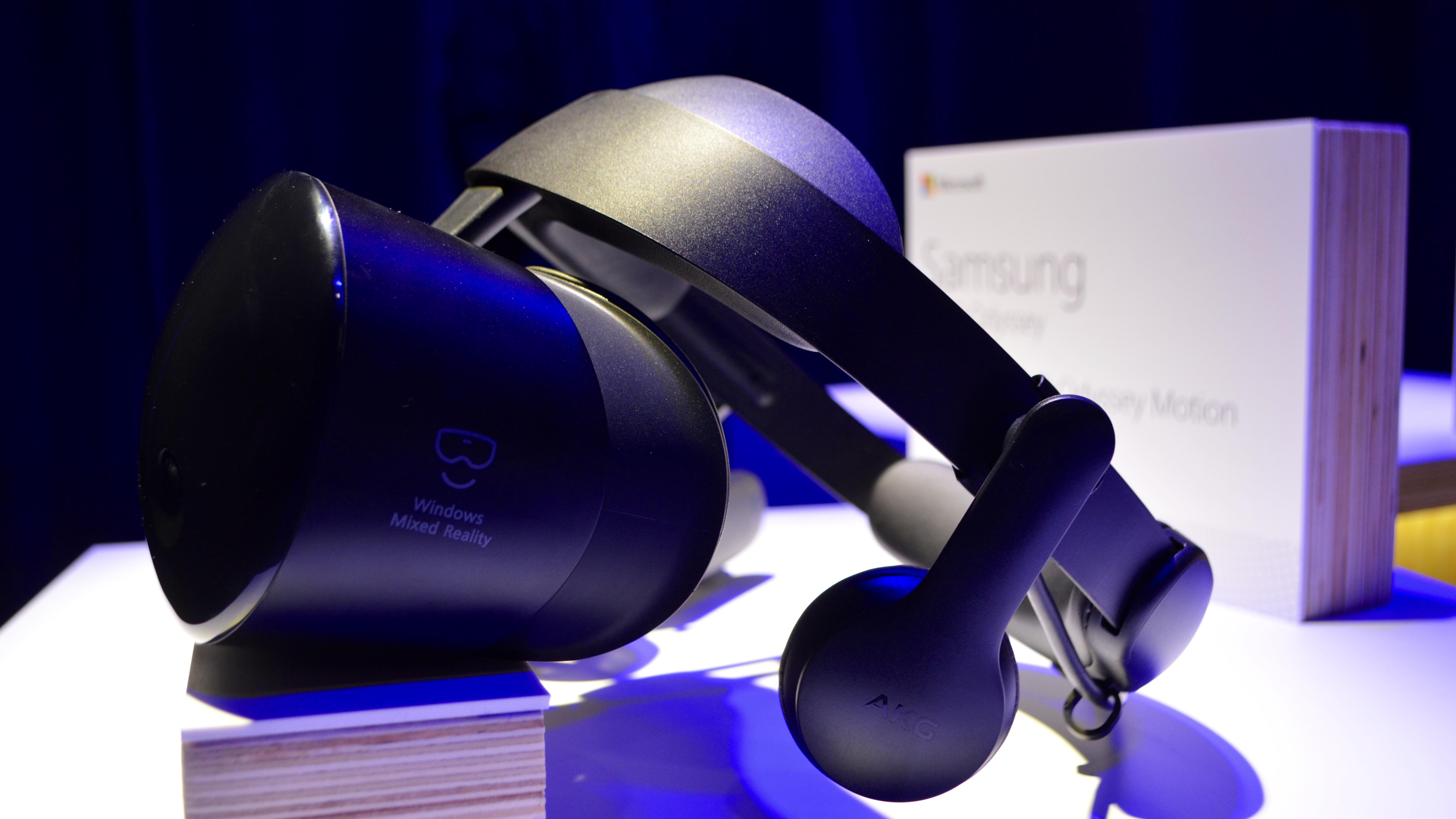 Lack of room-scale tracking isn’t the Achilles’ heel of Windows MR, but once you’ve tried HTC Vive and see those blue outlines telling you a wall is close by, it’s apparent when the feature is missing. Even more to the point, you run into more stuff or come in danger of doing so when it’s not there.

6DOF and inside-out tracking give you a sense of space inside a VR realm, but there’s an unmistakable separation from the virtual world and what’s going on outside the visor that leaves you feeling a little bit vulnerable.

As for the headphones, these sound crisp; Cortana rang through our ears with helpful directions, and music and characters’ voices came through with clarity during demos. Unlike the Acer and Dell headsets, which require donning separate headsets in true accessory fashion, the Samsung HMD Odyssey feels like a complete Windows MR device.

Where Samsung’s headset stands out from Acer in particular is in the displays; the Odyssey’s visuals are just that much smoother and more vibrant than Acer’s that, while anything but bad, lack the same punch.

Samsung HMD Odyssey offers a fun, eye-popping joyride into the world of virtual reality, and while its cost falls on this side of ‘maybe I shouldn’t,’ the built-in spatial audio adds a completeness to the system that the other Windows MR devices lack.

Should Oculus Rift and HTC Vive be worried? HTC Vive may be safe for now because of its industry-leading room-scale tracking, but Oculus Rift may want to watch its back. We find the Odyssey to be more comfortable to wear than Rift, and this editor didn’t experience the nausea she usually does after just a few minutes in Rift’s worlds.

What’s more, as with the other Windows Mixed Reality headsets, accessibility is a hallmark of the Samsung HMD Odyssey. There are no external sensors to set up, and whereas the higher-end competitors require a top-end PC to run VR experiences, a device as lightweight as an Ultrabook can generate Windows MR worlds. Though the Oculus Rift headset and controller bundle costs the same as the Odyssey, there’s the slightly less visible cost of the accompanying gaming rig that comes into play for an Oculus.

Still, even though Samsung has put forward a worthy competitor to the Oculus Rift and HTC Vive, those devices have a strong hold on the market, and it may be difficult for the Odyssey, or any Windows MR device, to break through. Not that Microsoft won’t try, of course.