It took a long time for the Samsung Galaxy Fold to hit store shelves, thanks to years of rumors followed by months of delays, but the resulting product felt undeniably first-gen.

If you're here to find out about Samsung's next foldable phone, you should check out our hands on Samsung Galaxy Z Flip review, which is quite a different beast to the Fold 2. It was launched in February 2020 alongside the Samsung Galaxy S20 range.

The Galaxy Z Flip has a different form factor to the Galaxy Fold (and likely the Fold 2) as it's a 'clamshell' device that folds like a flip phone of old or the Motorola Razr 2019, but with a long and flexible screen.

While the Galaxy Z Flip might be a comparatively affordable foldable, the Samsung Galaxy Fold is for those who want the cutting-edge of smartphone technology no matter what it costs and how unpolished it is.

But while we can’t recommend the Galaxy Fold to most, it is an exciting look at one possible future of phones, and the Samsung Galaxy Fold 2 is sure to fix some of the original's missteps.

Below you’ll find everything we've heard about it, along with a list of all the main things we want from it, because as you may have gathered, there’s plenty of room for improvement.

Latest story: The latest leak suggests the Samsung's Galaxy Fold 2 may come with a 256GB variant alongside the standard 512GB version.

Lots of Samsung Galaxy Fold 2 release date rumors pointed to it debuting early in 2020, but that turned out to actually be the Galaxy Z Flip, and there's no real idea of when the actual Galaxy Fold successor could be out.

We'd expect it to be towards the end of the year though, to give the Z Flip time to breathe without competition; perhaps it could even launch alongside the Samsung Galaxy Note 20.

Two reports claim the phone is set to launch at some stage during Q3 2020 (that's anytime between July and September) with one of those sources seemingly certain it'll be in July.

This would make sense given the fact the original Fold didn’t ultimately go on sale until September 2019, so it's possible it successor could see a release date around then too. Though the Samsung Galaxy Fold was announced way back in February, it only hit stores so late due to delays, so it is possible that we’ll see the Galaxy Fold 2 earlier too. 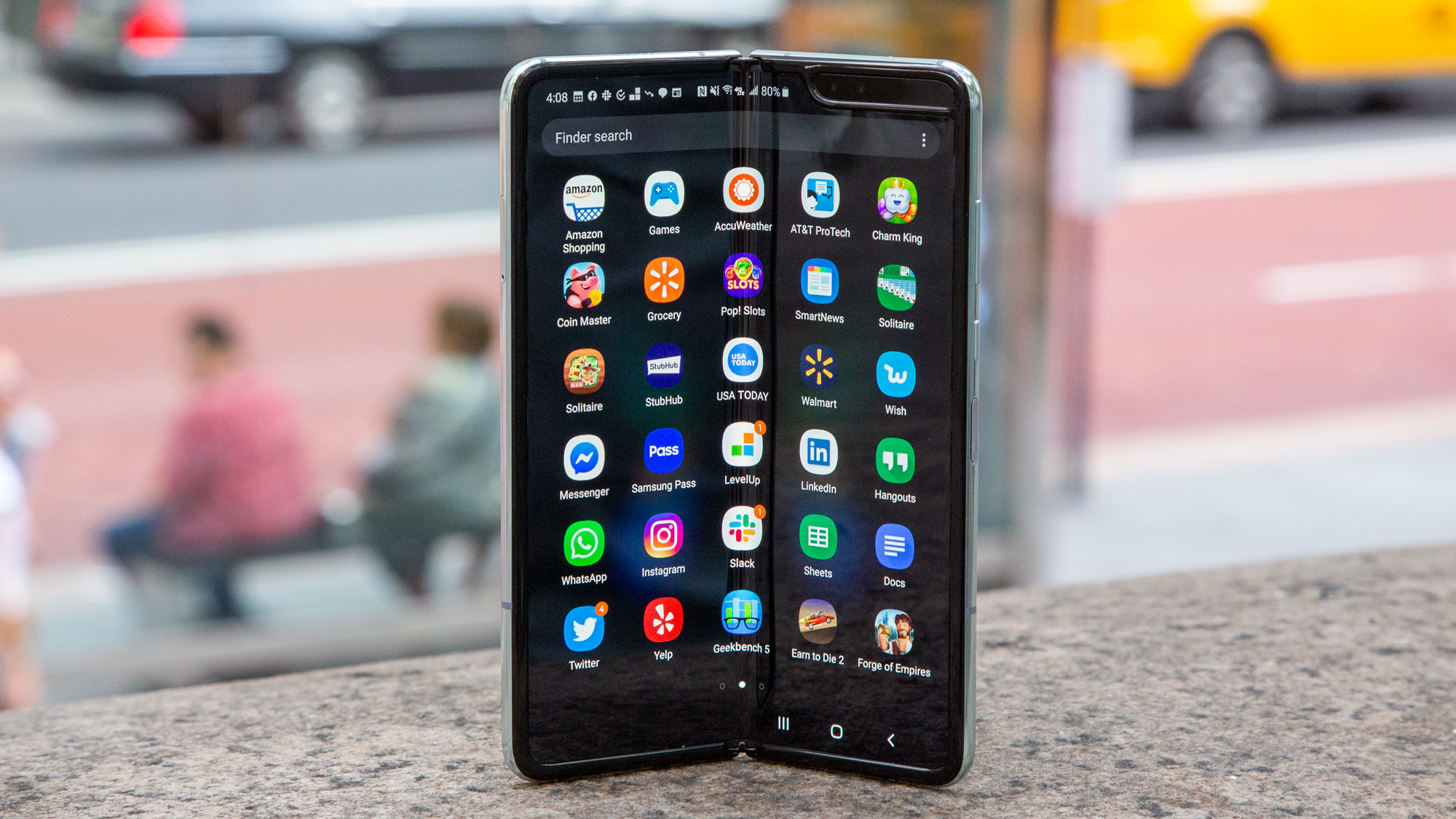 There aren't many rumors or leaks for the Samsung Galaxy Fold 2, as they all turned out to be of the Galaxy Z Flip, but we do know one or two things so far.

We’ve seen for example the three possible designs below, one of which is a clamshell design (likely the Z Flip), while the other two are closer to the current model. 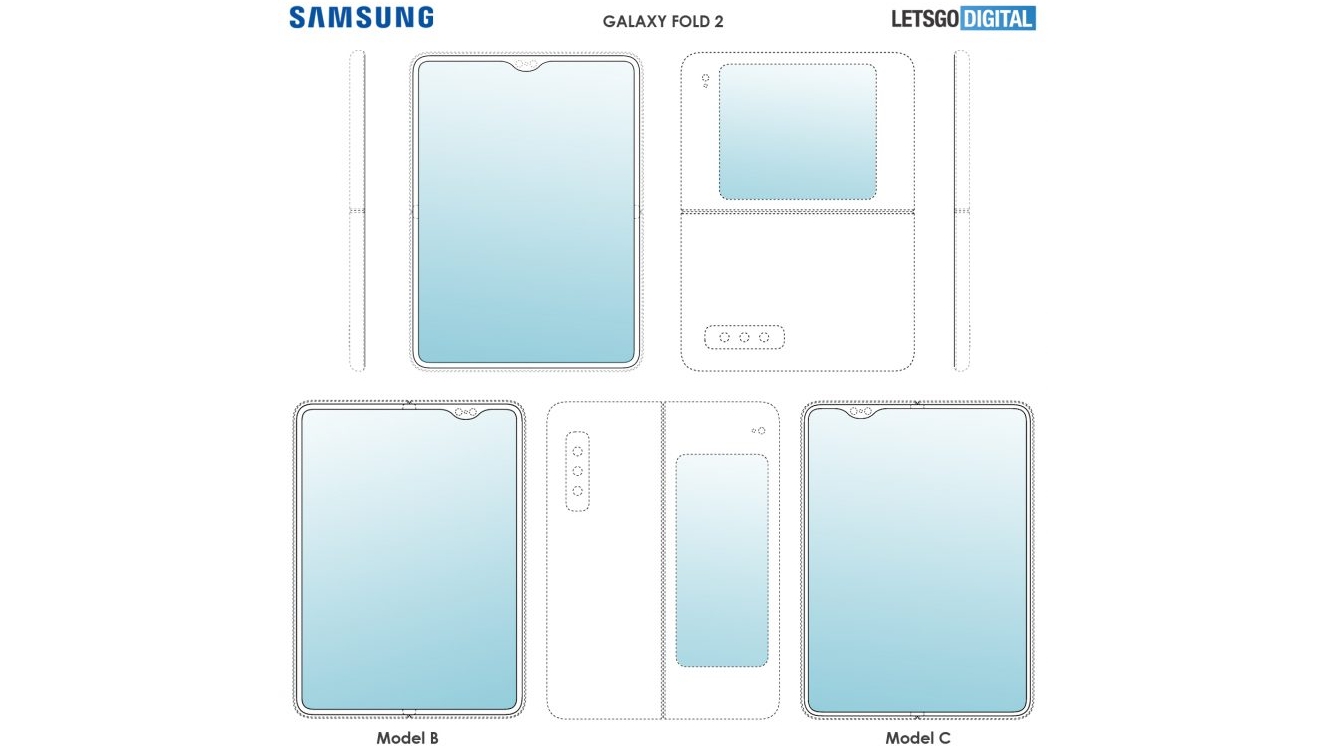 Another patent meanwhile talks about a folding phone that works with a stylus, which could bring a future Fold closer to Samsung’s Galaxy Note range. If the foldable phone was to launch alongside the Galaxy Note devices, that'd make a lot of sense.

Shipping with a stylus would make sense in order to make the most of the big screen, and this patent specifically describes a stylus that can even work on the curved part of the screen while the phone is partially folded.

These rumors followed an earlier report that Samsung was working on two new foldable phones, one of which is said to be the “clamshell-like device”, we've heard so much about.

The other is said to have a vertical fold like the original handset, but one that folds outwards, so the main screen is on the outside and always visible – it’s just either big or small depending on whether the phone is folded or unfolded. This sounds similar to the Huawei Mate X.

We've heard that the Samsung Galaxy Fold 2 might have a 108MP main lens and a lens with 5x optical zoom, although since that we heard the more believable rumor that it'll have a 12MP main camera and 12MP sensor with ultra-wide angle lens.

One report also claims the phone is set to land with an in-display selfie camera to avoid wasting room on a notch in the screen. This is something we've heard Samsung is developing for quite a long time.

Elsewhere it has been said that it will have a 10MP front-facing camera and a Snapdragon 855 chipset. That's the same chipset as the original Galaxy Fold and would be a bit dated by 2020 standards. We've heard several times that the 855 will be used, although 855 Plus has been mentioned too.

One chunky leak let us know the Samsung Galaxy Fold 2 could come with an S Pen stylus like the Galaxy Note phones, so you can annotate, sketch, doodle and take notes. A few other pieces of information were provided in the leak too.

One possible battery upgrade is in the phone's charging speed, as code found in official Samsung software points to it offering fast charging of somewhere between 25W and 45W, while the original Galaxy Fold is just 15W.

It's possible the Samsung Galaxy Fold 2 will come in both 4G and 5G versions, according to leaked code-names for the handset, but it remains to be seen if each is just region-exclusive like for the original Galaxy Fold.

Another report also suggests the Galaxy Fold 2 will come with a 256GB variant alongside the standard 512GB. This information comes from SamMobile, and the site says it trusts its sources that there will be a lower spec version if you don't need all that space.

There are always ways phones can improve, but that’s truer of the Galaxy Fold than most high-end handsets. Impressive as it is in some ways, it’s rather lacking in others. With that in mind, here’s what we’re hoping for from the Samsung Galaxy Fold 2.

So for the Galaxy Fold 2 we want to see a substantial reduction in price. It’s still likely to cost more than, say, the Samsung Galaxy S11, but being a second-generation product it’s possible that Samsung will be able to push the price down below its current level. It will need to if it wants foldables to become remotely mainstream. 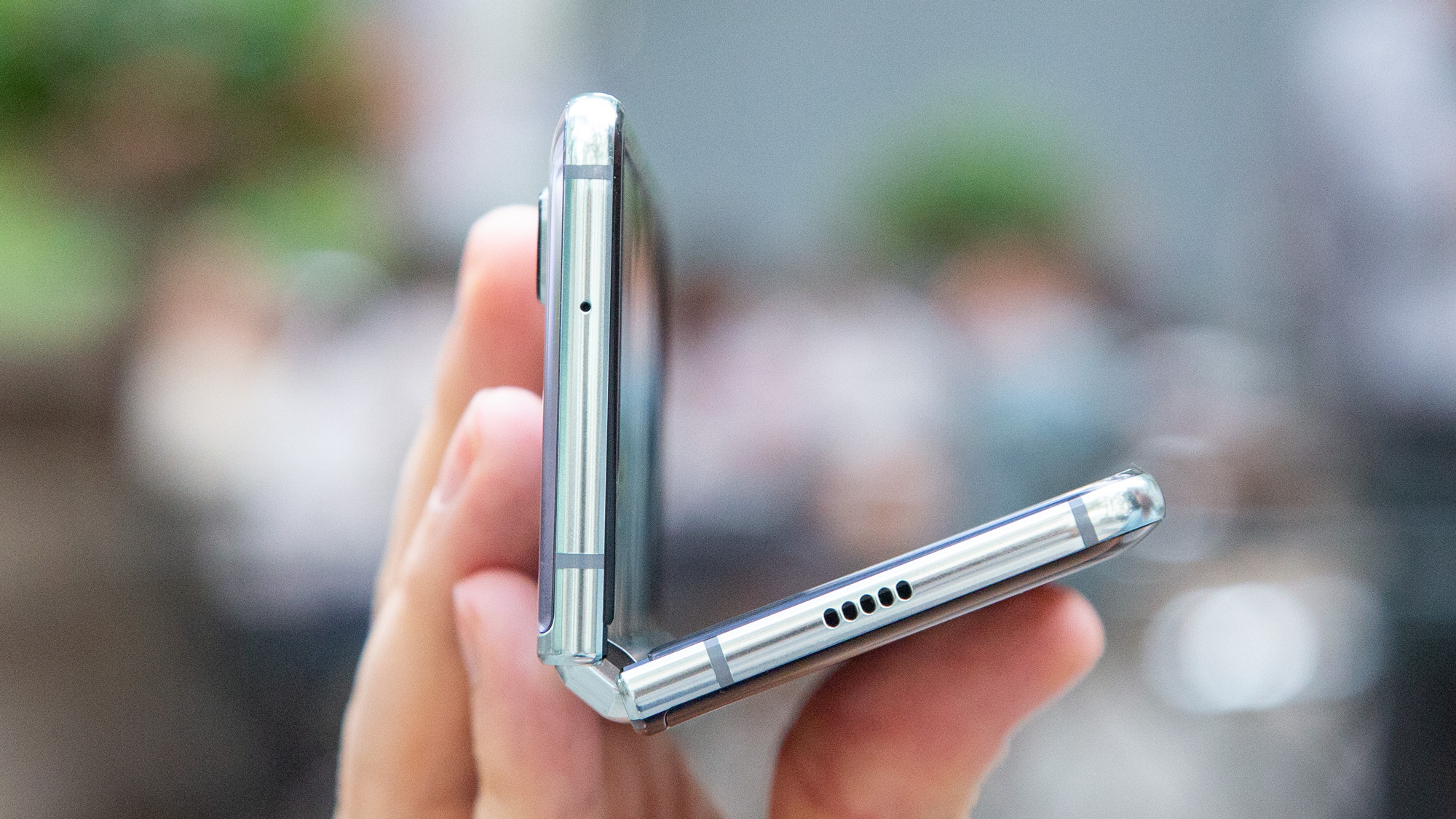 While the Galaxy Fold is more durable than it originally was before Samsung had to delay it and make some alterations, it’s still even more fragile than a standard phone.

With a folding screen, a hinge, and a secondary smaller display, that’s perhaps inevitable, but we’d like to see Samsung do everything it can to make the Fold 2 tougher, especially if it’s going to be this expensive.

Basically, we want a phone that doesn’t need an entire care video created for it. 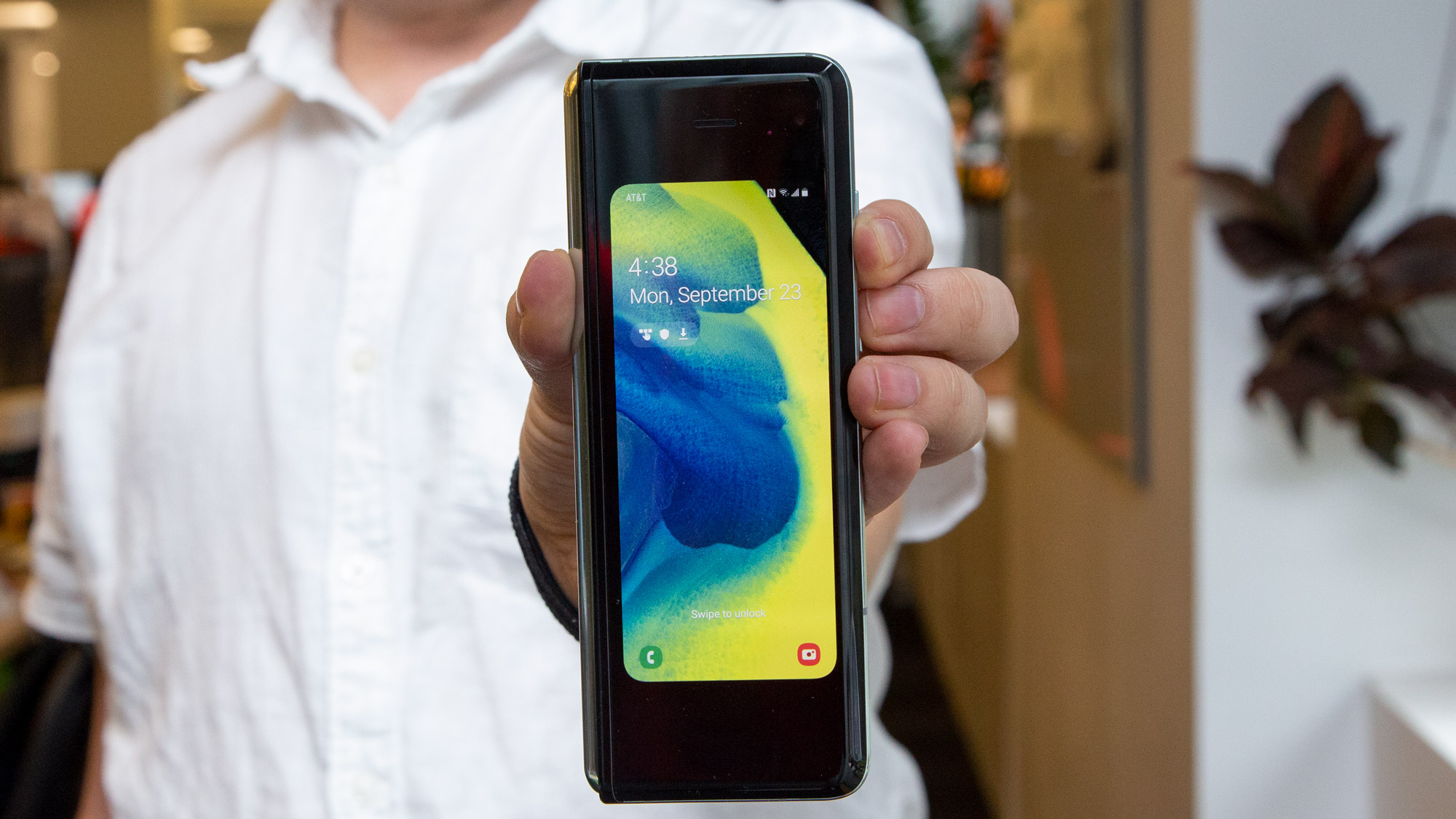 While the Galaxy Fold’s 7.3-inch main foldable display is impressive, its 4.6-inch secondary screen is less so. This is the screen you interact with when the main display is folded shut. This one doesn’t fold, is small, and has very large bezels above and below it.

For the Galaxy Fold 2 we want it at a minimum to have less bezel and be a bit bigger, but by designing the phone to have the main screen on the outside (so that the main screen folds down to half the size but is always visible), Samsung wouldn’t have to worry about building an extra display in at all. Though this might make the Fold 2 more fragile.

One issue with the Galaxy Fold is that the crease down the middle is always noticeable. You’ll get used to it, but on a phone this expensive we don’t want to have to get used to things or make compromises, so for the Galaxy Fold 2 we’re hoping Samsung can do a better job of minimizing the crease when the screen is open.

5. An even refresh rate 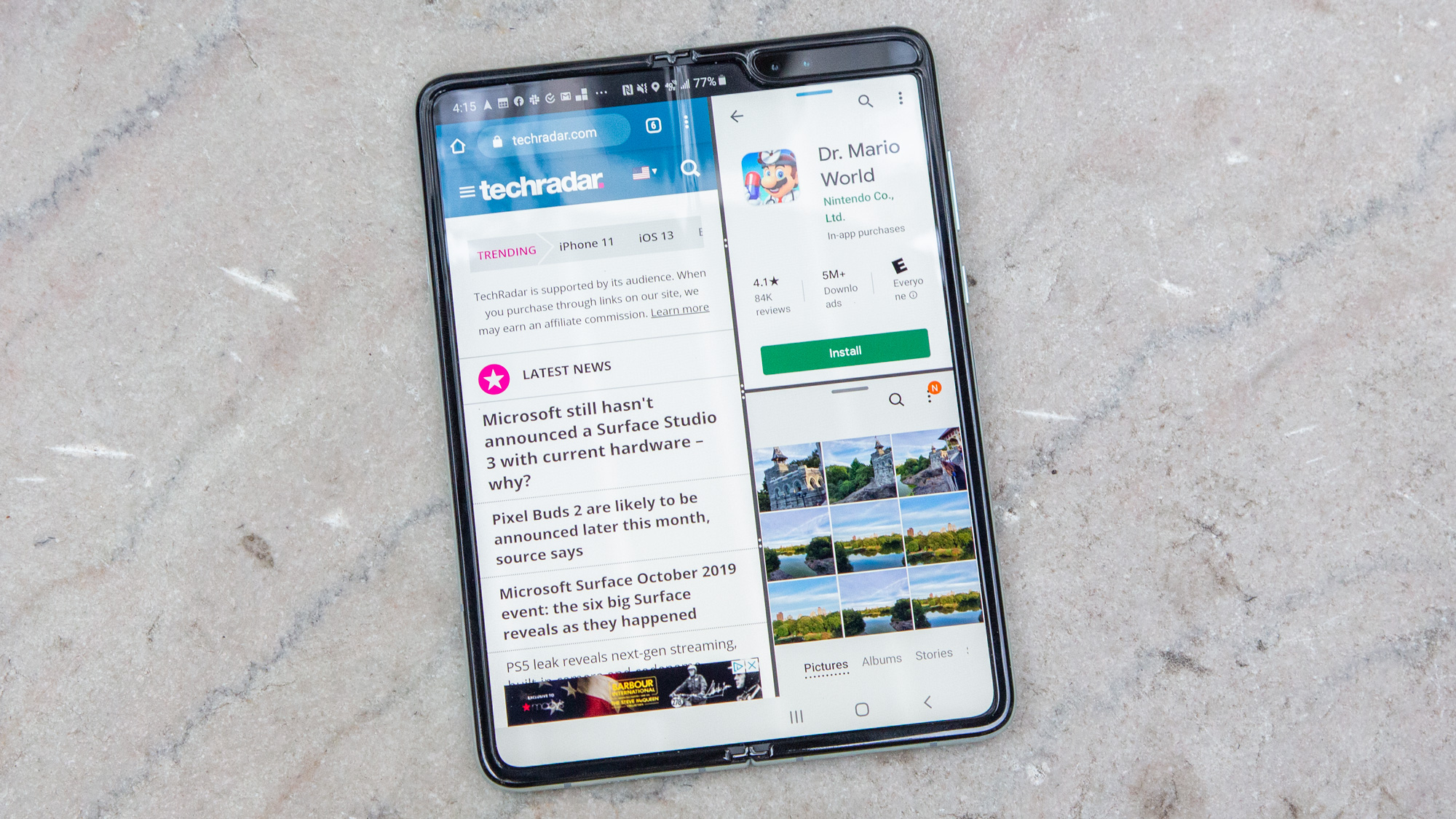 The Fold’s display also suffers from an uneven refresh rate in our tests, meaning for example that if you scroll through a text-heavy webpage, the words will shift unevenly across the screen.

This isn’t the sort of thing we expect from a premium product, especially from a company with as much screen experience as Samsung, so we’d like to see this fixed for the next model.

A small point this one, but the Samsung Galaxy Fold, big as it is, hasn’t found space for a microSD card slot. Given that it comes with 512GB of storage this isn’t a big deal, but it’s still something we’d like to see offered in version two.

The Fold’s 4,380mAh battery (or 4,235mAh in the 5G version) is fairly large by smartphone standards, but this isn’t a standard smartphone, and while battery life is very solid, there’s always room for improvement.

So for the Galaxy Fold 2 we’d like to see Samsung squeeze an even bigger battery into it, making the most of that large size for very long life.