The OnePlus 7 and OnePlus 7 Pro haven’t been out long, but OnePlus typically refreshes the range with a ‘T’ model later in the year and we’re expecting the same to happen this year.

That might surprise you – after all, the Pro model is a new part of the range so could easily have replaced the T update, but rumors of a OnePlus 7T are starting to roll in, so it seems there’s no real change in the company’s release strategy.

Coming so soon after the OnePlus 7 we wouldn’t expect many massive changes, but there are a number of things we’re hoping to see, which you’ll find listed below. We’ve also highlighted all the key news and leaks surrounding the OnePlus 7T, so read on for those too.

Updated: it seems a whole spec sheet for the OnePlus 7T and 7T Pro has been leaked, giving us huge insight into the upcoming phones and what they'll be running under the hood. There's a lot of information to get through, but if it's correct, it could mean the devices aren't that much of a step up from the OnePlus 7 and 7 Pro. The leak also includes a possible release date.

The main release date rumor so far for the OnePlus 7T points to a September 26 announcement, but oddly only for India.

That will apparently be followed up by an October 10 announcement for the US and Europe, and an October 15 sale date (though the source doesn't specify whether that's a worldwide on-sale date or just for some regions). We've since heard those two October dates put forward again.

If that October 15 date sounds familiar it's because an earlier unclear tweet from the same source also pointed to October 15.

TechRadar later received confirmation from a source close to the matter that this date was wrong, but at that time it was assumed that October 15 was being put forward as the announcement date, not the date the phone would go on sale.

These dates would also more or less line up with past releases. The OnePlus 6T was announced in October 2018 then hit stores in November, while the OnePlus 5T and OnePlus 3T were both announced and went on sale in November of their respective years, so an October or November announcement looks very likely.

As for what it will cost, it’s first worth noting that we might get two new phones – a OnePlus 7T and a OnePlus 7T Pro. But in any case, based on past form we wouldn’t expect prices to be much different to the OnePlus 7 and 7 Pro, though they may rise a bit.

Two separate leaks have now possibly shown the OnePlus 7T Pro. One set of images was shared on Weibo (a Chinese social network) and shows the alleged OnePlus 7T Pro from both the front and back.

However, it’s in a case, so many details are obscured, and what we can see looks basically identical to the OnePlus 7 Pro. 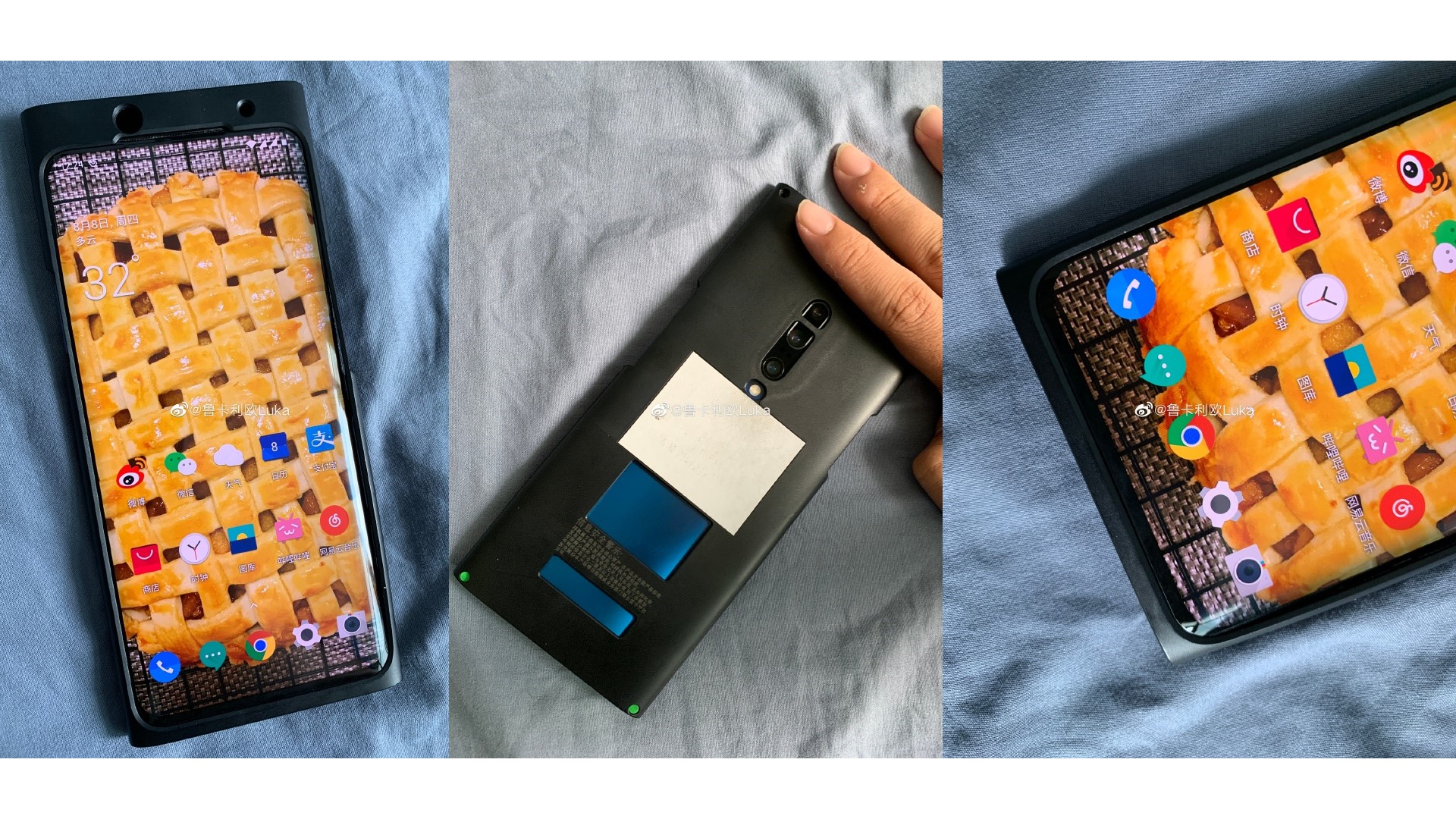 That includes a curved bezel-free screen, and three rear cameras in the same arrangement. The only possible difference is that the speaker grille above the screen looks as though it might be more prominent, which could suggest an audio upgrade.

The same design can also be seen in the leak below, albeit only the front of the phone this time. That said, IBTimes India claims to have received confirmation from OnePlus that this second set of images actually just shows the OnePlus 7 Pro. 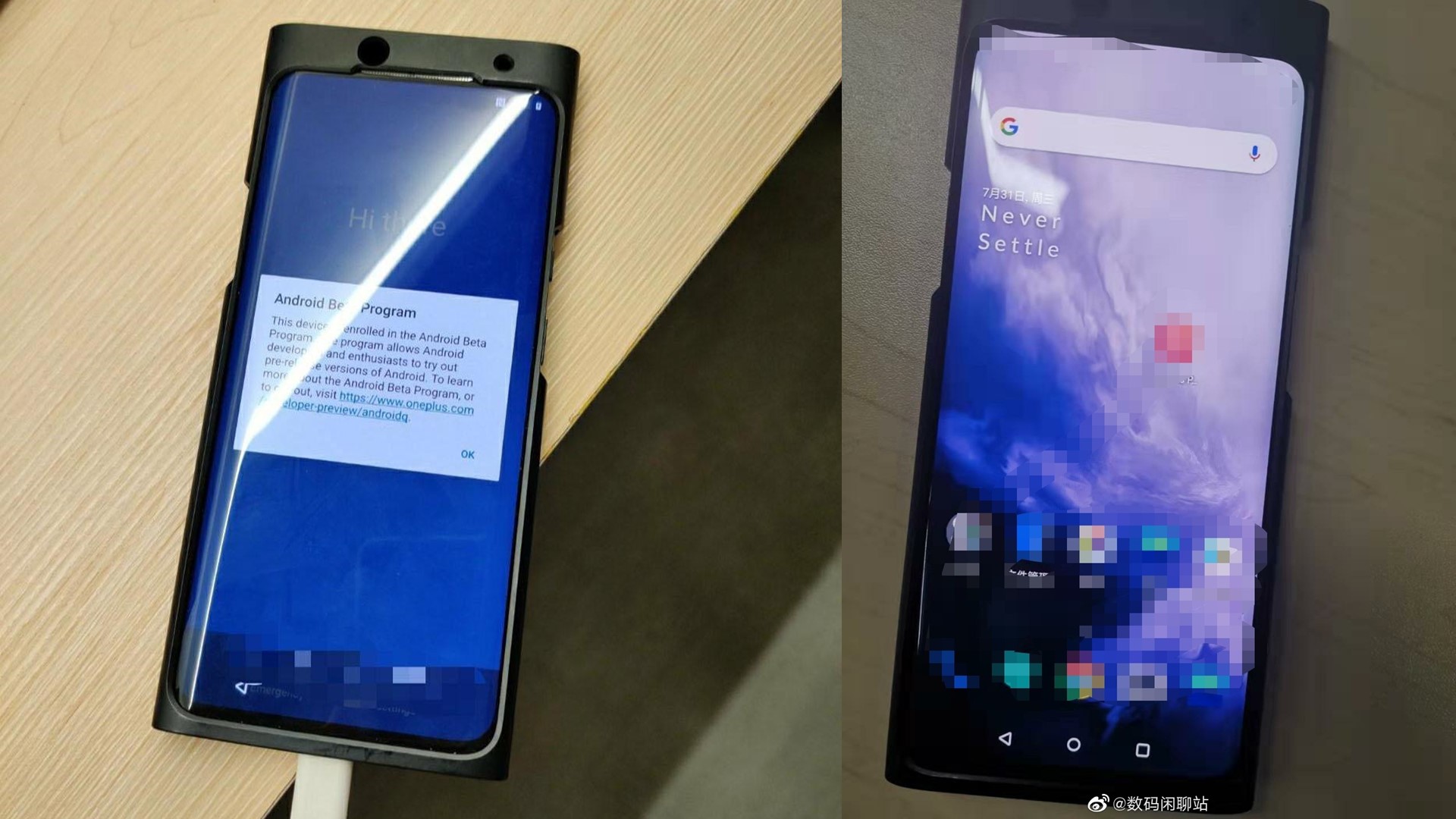 That’s interesting because the speaker again seems to stand out more here than on the 7 Pro, but it could just be the design of the case emphasizing it. In any case, it seems these images are likely fake, which also makes us seriously question the images further up in this article, since the design is the same.

It would make sense for the design to stay much the same though, since ‘T’ models tend to look similar, just with a few spec upgrades.

Having said that, an alternate design has also been leaked. First seen in the photo above back in December 2018, and then more recently leaked in the sketches below.

This design shows a circular camera block, which is quite a change from the shape on the OnePlus 7 range and could suggest some major photographic upgrades. As noted though, the 'T' models usually don't get much more than a specs upgrade, so we'd take this with a pinch of salt. 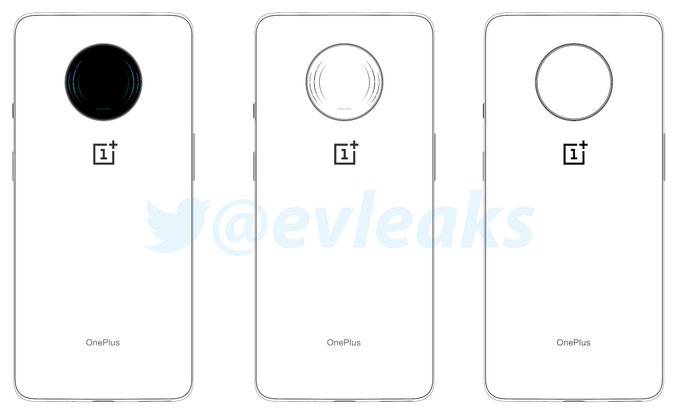 OnePlus's CEO has confirmed that a new OnePlus phone with 5G will be launching by the end of the year – so this will almost certainly be some version of the OnePlus 7T.

We've also seen a huge info-dump in the form of leaked specs for both the OnePlus 7T and One Plus 7T Pro. It suggests both handsets will use the new Snapdragon 855 Plus chipset, have 8GB of RAM, an in-screen fingerprint scanner, and a 16MP front camera.

The OnePlus 7T meanwhile is said to have a 3,800mAh battery, and a choice of 128GB or 256GB of storage. It also has two of the same rear cameras, but the 7T Pro's telephoto one is apparently replaced by one with slightly different specs here, namely a 12MP one with 2x optical zoom.

The OnePlus 7 and especially the OnePlus 7 Pro were impressive phones, but they could be even better with these upgrades.

So we hope that the OnePlus 7T and/or OnePlus 7T Pro does. We’d particularly like to see low-light photo quality improved, along with the ability to zoom in further.

While OnePlus claims that the OnePlus 7 range does have some water resistance, there’s no official IP rating, meaning no certainty as to how water resistant the phones are.

The lack of an IP rating was apparently to save money – since it costs money to get the phones certified, and since even with such a certification most brands don’t cover water damage as part of the warranty.

It’s a reasonable argument, but for the OnePlus 7T we’d still like the reassurance that an IP rating provides, and ideally improved water resistance too, since various third-party tests suggest the OnePlus 7 range isn’t quite as water resistant as most flagships.

The standard OnePlus 7 has a teardrop notch for its front-facing camera, which almost feels dated in 2019. The OnePlus 7 Pro meanwhile has a pop-up camera, which is more modern and allows for an all-screen design, but also makes the camera feel more vulnerable.

Not only that, it also makes facial recognition less appealing, since you have to wait for the camera to pop up, and since doing that dozens of times a day to unlock your phone could wear the mechanism out.

So for the OnePlus 7T we’d love to see an in-screen camera. That would allow the phone to retain the OnePlus 7 Pro’s all-screen design, without any of the problems that come with a pop-up camera.

We should note that this is unlikely to happen. While the tech exists, it’s not yet available on any handsets, and with the T model likely to be a minor upgrade we wouldn’t particularly expect it, but you never know.

One small feature that OnePlus hasn’t yet embraced is wireless charging. This probably isn’t a huge deal for most people, but it is a standard flagship feature, so it’s something we’d like to see, especially with the OnePlus 7 Pro being more of a real flagship, rather than the usual more affordable alternatives that OnePlus offers.

The OnePlus 7 Pro in particular is a big, heavy and fairly thick thing, so we’d love to see the OnePlus 7T get shrunk down slightly, and be a bit lighter.

There will be limits to what can be done here while still offering a big screen and battery, but we reckon that refinements are possible. And the screen doesn’t really need to be quite as big as the OnePlus 7 Pro’s mammoth 6.67-inch one anyway.

6. A bigger battery with better life

The OnePlus 7 has a 3,700mAh battery and the OnePlus 7 Pro has a 4,000mAh one. Those are both respectable sizes, but not the biggest around, and neither phone delivers particularly brilliant life.

So we’d like to see a bigger battery in the OnePlus 7T, and beyond that possibly some software or hardware optimizations to help it last longer. Though in the case of software optimizations, we don’t want the company to take the sort of approach that could interfere with the functionality of apps.

The OnePlus 7 range charges very fast, but only if you use an official OnePlus charger. That’s not a huge problem as one comes in the box, but if you ever need a replacement or a spare, they’re expensive.

This also means that if you borrow someone else’s charger you won’t get fast speeds (unless they happen to have a OnePlus one) and nor will you get fast charging from portable chargers/power banks. So we’d like to see this addressed for the OnePlus 7T.