In a world in which the Nintendo Switch exists, where users have access to a beautiful Nintendo handheld console with detachable controllers and a stunning HD display, and where gamers are able to play honest-to-goodness Nintendo games on their iOS and Android devices, one might be forgiven for thinking that there's no longer a place for the 2DS and 3DS.

With this in mind, it may seem like a curious decision for the big N to return to the 2DS/3DS ecosystem having just launched its greatest and most powerful handheld yet. However, with a huge back-catalogue of games and a number of big release still on the horizon, it's clear that there's plenty of life left in the popular dual-screen gaming machine. 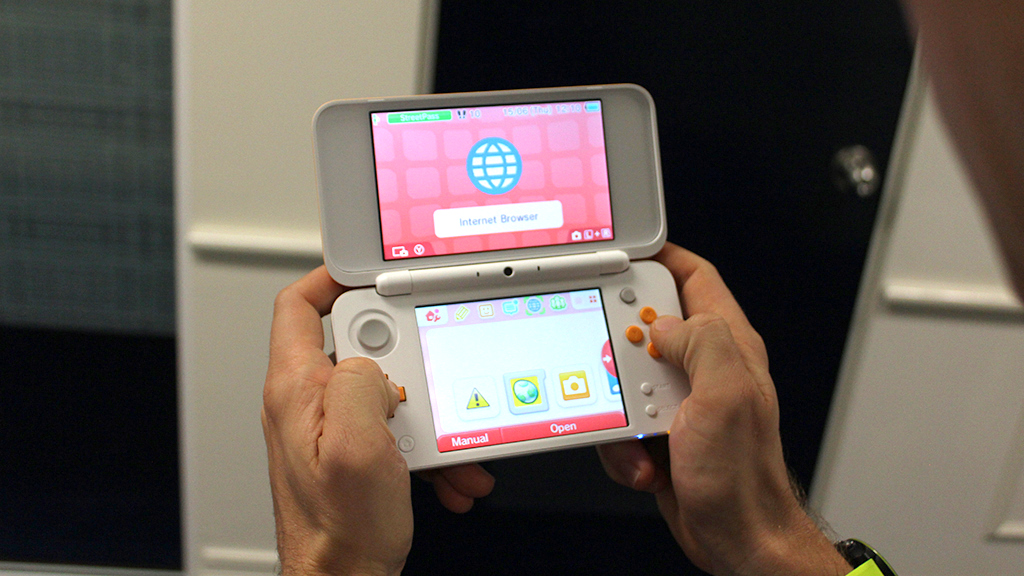 Having achieved some success with its affordable and 3D-less Nintendo 2DS handheld, and an ultimate level of refinement with 2015's New Nintendo 3DS XL, the house that Mario built has seen fit to combine the best of both worlds with its latest device, the New Nintendo 2DS XL.

Still, the question remains — does the New Nintendo 2DS XL have what it takes to impress in an age where Nintendo fans can get a home console-quality experience on the go?

The original 2DS had something of a divisive design, with its flat, wedge-like shape that had both of the system's screens placed on a single, non-foldable plane. Getting your own hands on it was really the only way to see if you liked what Nintendo was attempting to do, with many finding it to be quite a comfortable piece of kit.

That said, there's no beating the tried-and-true clamshell design that Nintendo has been rocking since the Game & Watch era. This foldable design has been a mainstay of every DS and 3DS system that Nintendo has ever released, and we're glad to see it applied to the 2DS line for the very first time. 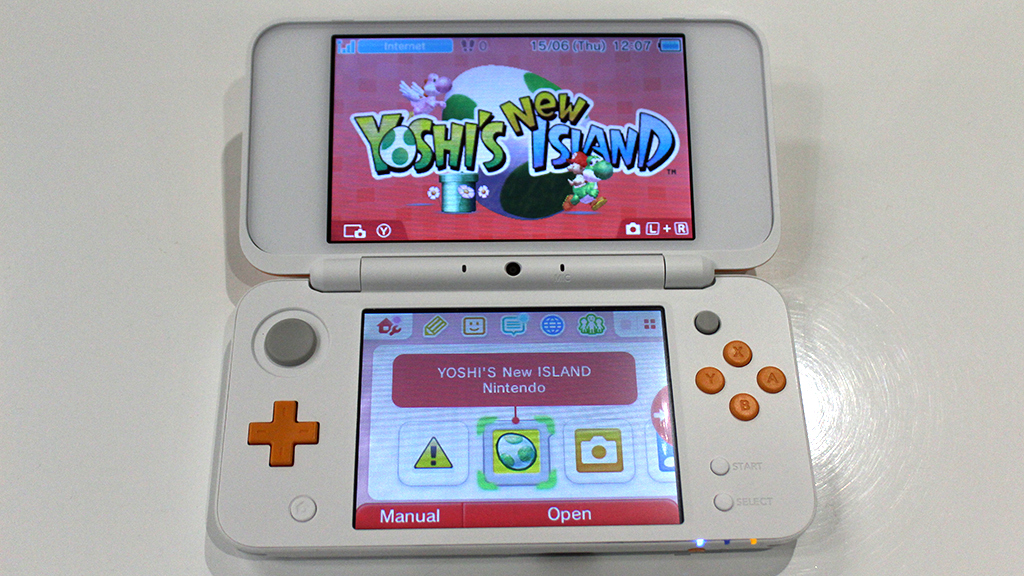 The first thing you'll probably spot is that the new 2DS XL's hinge now protrudes from the unit's body while closed. On previous iterations, the hinge sits flush with the handheld's spine and shoulder buttons. That's hardly a dealbreaker, though it does mean that the New 2DS XL loses a bit of its sleekness, resulting in a handheld that doesn't feel quite as nice to hold when shut. 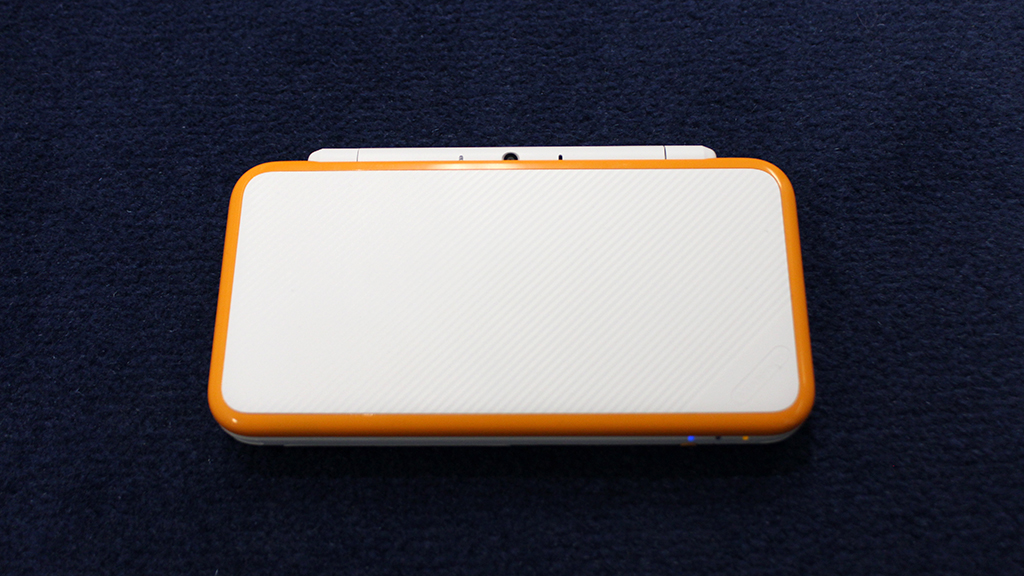 Open the New 2DS XL up and you'll see the top screen now has a much smaller bezel. This is because the front-facing camera and mic have been moved down to the hinge, which is probably another reason why it now sticks out. The placement is not a big deal when it comes to taking selfies, though you may have to tilt your head forward to avoid the double-chin effect.

That said, because this redesigned hinge sticks out, the camera is no longer tucked away when the clamshell is shut, meaning you'll always be able to see at least two-thirds of the lens at any given time. This could also potential lead to the lens getting scratched or damaged if not kept in a protective case.

It's also thinner than the New 3DS XL, with a top screen that's incredibly thin for a handheld. This is likely due to the unit's lack of 3D functionality, which would've made that top display slightly chunkier. 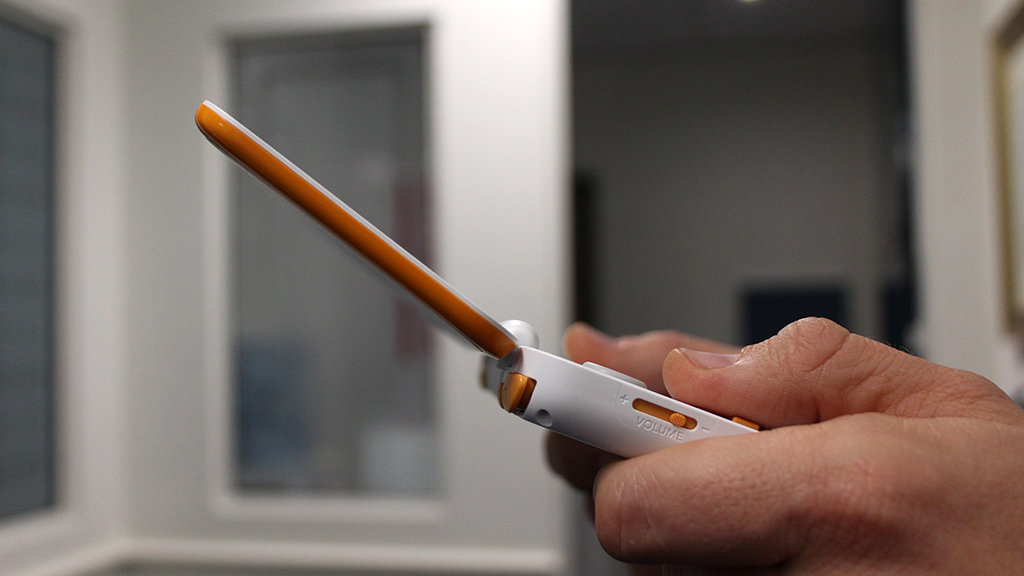 Along with these differences, the power button, headphone jack and stylus have been moved to the bottom of the unit, along with the enclosed microSD and cartridge slots (and thankfully, you won't need a screwdriver to swap out microSD cards this time around). The left and right speakers have also been moved from the console's face to the underside. A volume slider can be found on the left side of the bottom half.

Speaking of the unit's face, you'll find a d-pad, circle pad and home button on the left side, while four game input buttons, Start and Select buttons and a nub-like C-stick can be found on the right. Like the New 3DS XL, new ZL and ZR buttons have been added in between the L and R shoulder buttons. 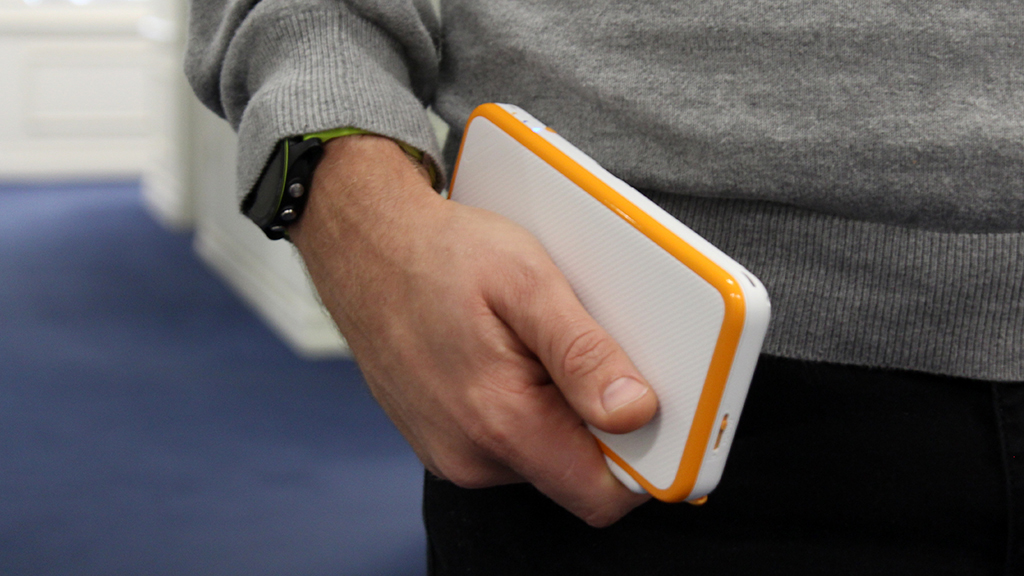 Overall, the New 2DS XL is a beautiful device, with a nice ridged texture on its top side that makes it feel quite premium. Admittedly, the top screen doesn't feel as sturdy as it has on previous models, with a slight wobbliness to it when you shake the unit around.

We also found the stylus itself to be a little too short physically, barely extending past our knuckle when held in a traditional pencil position. This won't be an issue for small children, but adults may find it a less than ideal. 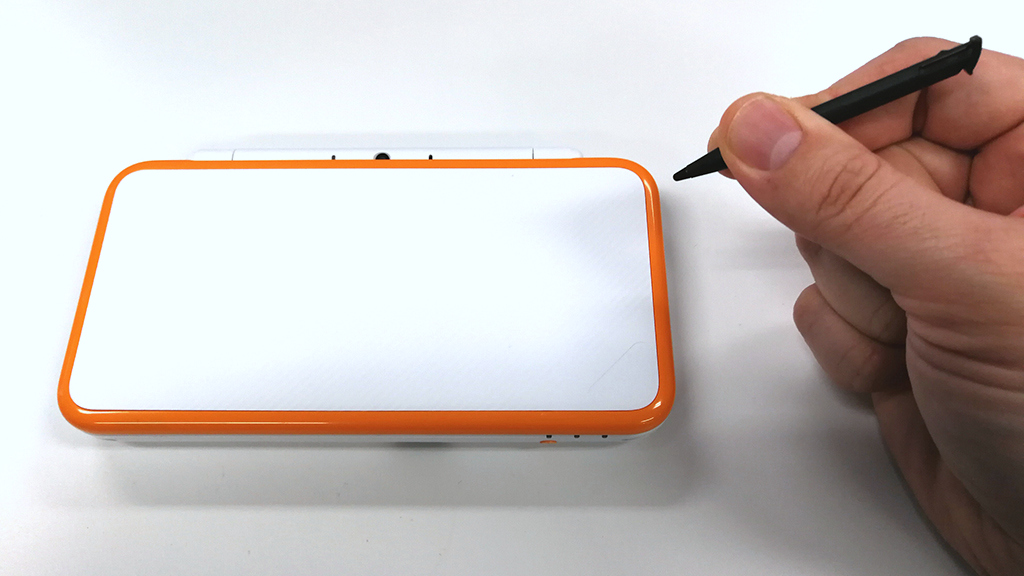 While it may not seem like a tremendous selling point, we're happy to note that the New 2DS XL includes a charger in the box – something that was bafflingly absent from the New 3DS's package.

Another thing that feels weird to describe as a "feature" (but must be, due to it being the main point of difference between this and the New 3DS XL) is the fact that the New 2DS XL, as the name would suggest, only displays in 2D. This not only brings the price of the unit down dramatically, it also contributes to the thinness of the top screen. 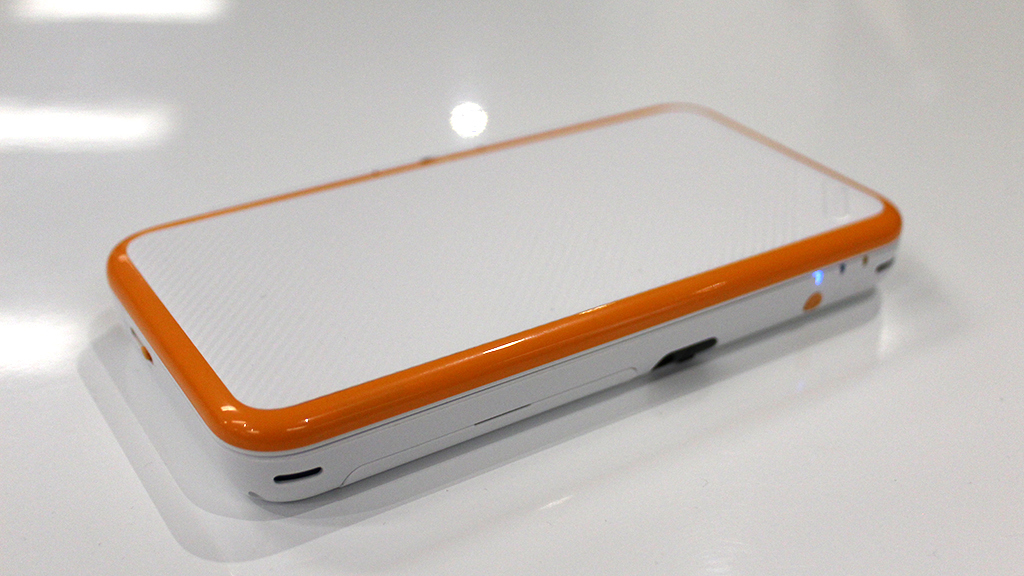 It's also worth noting that few 3DS games these days are actually designed with 3D in mind, making the 3D aspect of the console something that most owners will rarely use. Without games taking advantage of 3D camera perspectives like Super Mario 3D Land did, the only 3D you're getting is a slight separation of foreground and background elements.

Still, given the vast 3D improvements introduced with the New 3DS XL, including a front facing camera that tracked your head for a more accurate and responsive 3D experience, it's a bit of a shame that Nintendo's latest handheld has dumped the feature entirely. 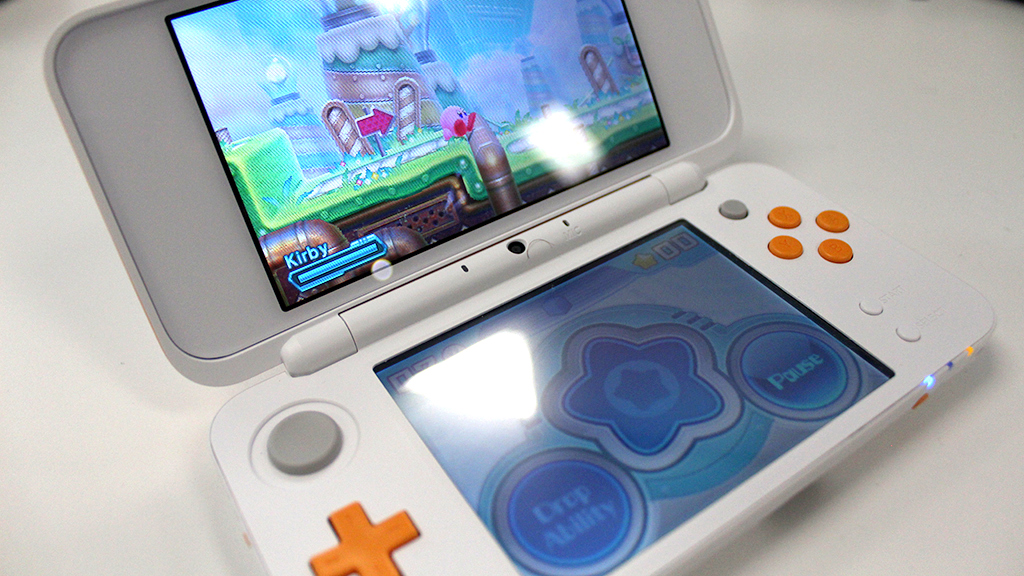 If that kind of thing is important to you though, the New 3DS XL is still readily available. This new handheld, however, is clearly intended as a cheaper alternative for those people who don't care about 3D gaming at all. In that sense, the New Nintendo 2DS XL certainly delivers.

It's also worth noting that as this is part of Nintendo's 'New' branded handhelds, the New 2DS XL features the same faster CPU that was introduced with the New 3DS XL. This means apps and games will launch faster, and some titles will even experience quicker loading times. Also, some newer 3DS games will only work on 'New' branded systems. 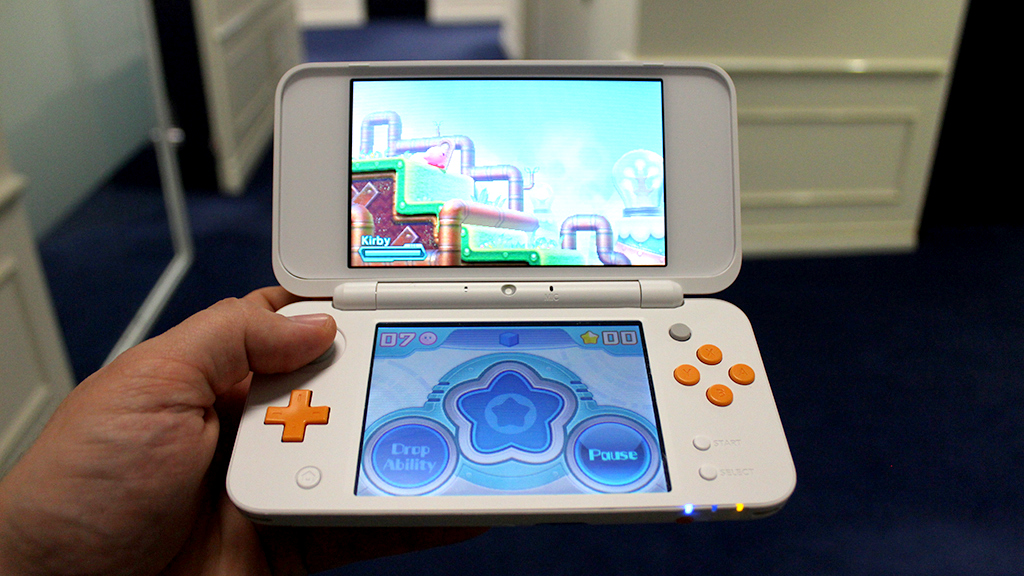 Maybe the recent release of the Nintendo Switch, with its big and beautiful HD screen, has spoiled us somewhat, but our first reaction to turning on the New 2DS XL was "whoa, this looks older than I remember."

Quite frankly, it's hard to look at a 400 x 240 pixel display in 2017 and not immediately notice all of the individual pixels in front of you. Sure, the screen achieves a nice level of brightness (when looked at from front on), with colors looking especially vibrant, but this screen is basically identical to the one found on the original 3DS (when viewed in 2D mode) way back in 2011. Even then, we were already used to playing HD games on our phones, so you can imagine how long in the tooth it looks now. 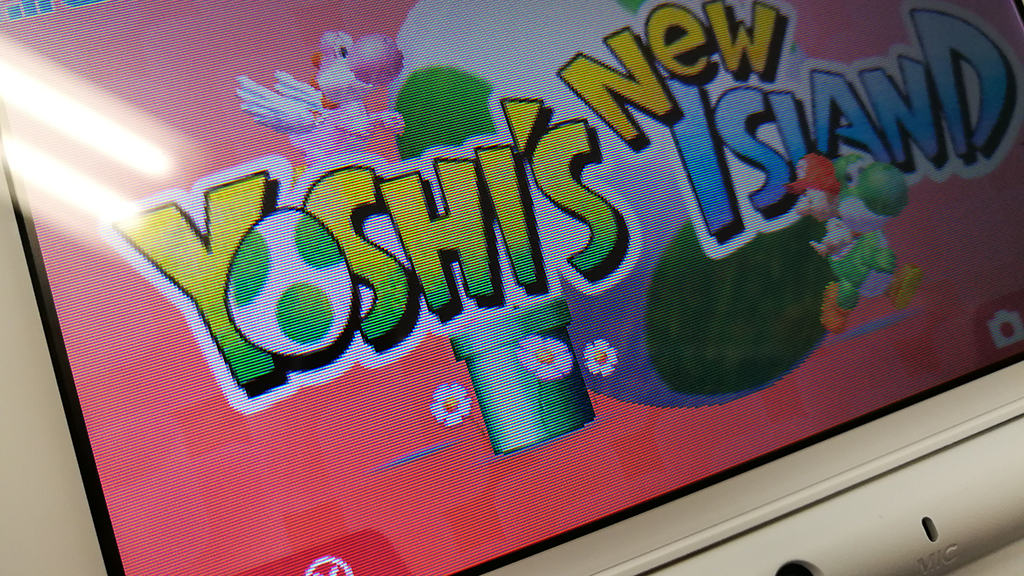 Still, there's a comfortable amount of screen real estate here, with the upper screen providing 4.88-inches of play area and the lower touchscreen giving the player 4.18-inches to swipe their stylus across. 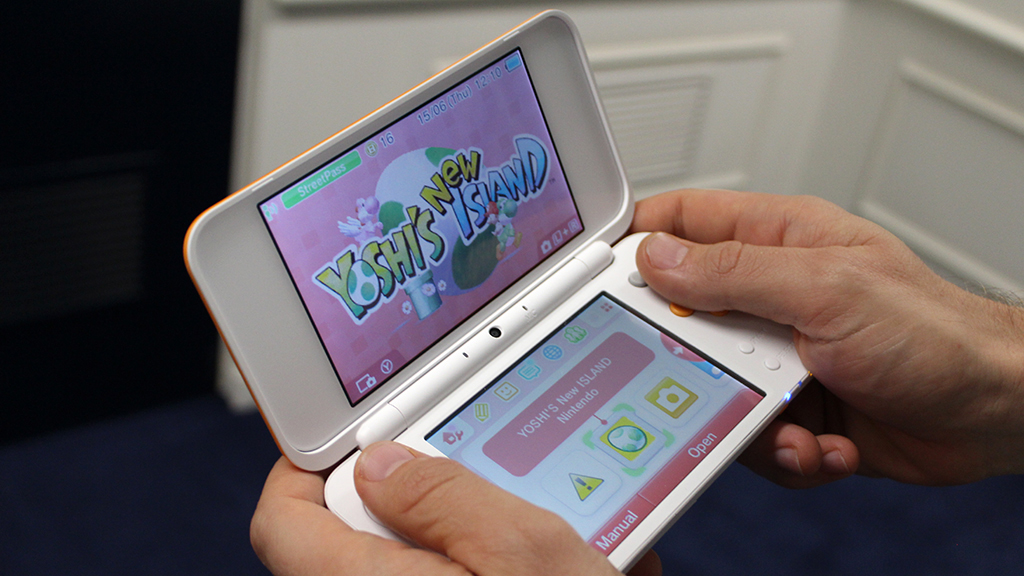 While the New Nintendo 2DS XL's screen resolution might fail to blow people away in an age where HD resolutions are expected as a bare minimum, it stops mattering so much when you start playing the many classic games available in the 3DS library.

For fans of role-playing games, Nintendo's 3DS library is like mana from heaven, offering the likes of Fire Emblem Awakening, Xenoblade Chronicles, Monster Hunter Generations, Bravely Default, Pokémon Sun and Moon, Shin Megami Tensei IV and many, many more titles in that vein. It would not be inaccurate to consider the platform the best ever portable for fans of JRPGs – there are almost too many great titles to choose from. 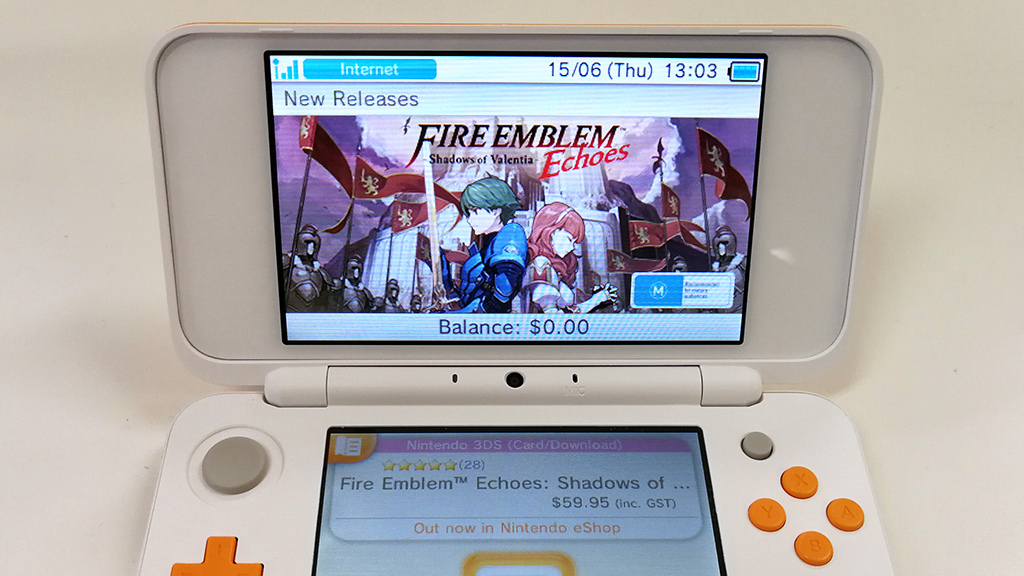 If you're after more traditional Nintendo-made games, then the system has you covered in that regard, too. The Legend of Zelda: A Link Between Worlds, Super Mario 3D Land, Poochy & Yoshi's Woolly World, Kirby: Triple Deluxe, Donkey Kong Country Returns and Metroid Prime: Federation Force offer something for everybody when it comes to classic Nintendo titles, and a Virtual Console section on the eShop also provides access to a number of classic titles from the NES and SNES era.

Best of all, the New 2DS XL, like all the 3DS systems before it, is completely backwards compatible with Nintendo DS titles, so you have a whole other generation of dual screen games at your disposal.

Add to this the fact that there are some great-looking 3DS titles still to come – like Metroid: Samus Returns, which was just announced at E3 2017 – and you have yourself a library that should keep you occupied for quite some time to come.

With the New 2DS XL, Nintendo has provided gamers with the perfect entry point for those who want to play the incredible library of 3DS titles without having to pay extra for gimmicky 3D functionality that doesn't really add anything of note to the gameplay experience. That they get to do this on a classic clamshell device rather than the odd wedge-shaped original 2DS is just the icing on the cake. 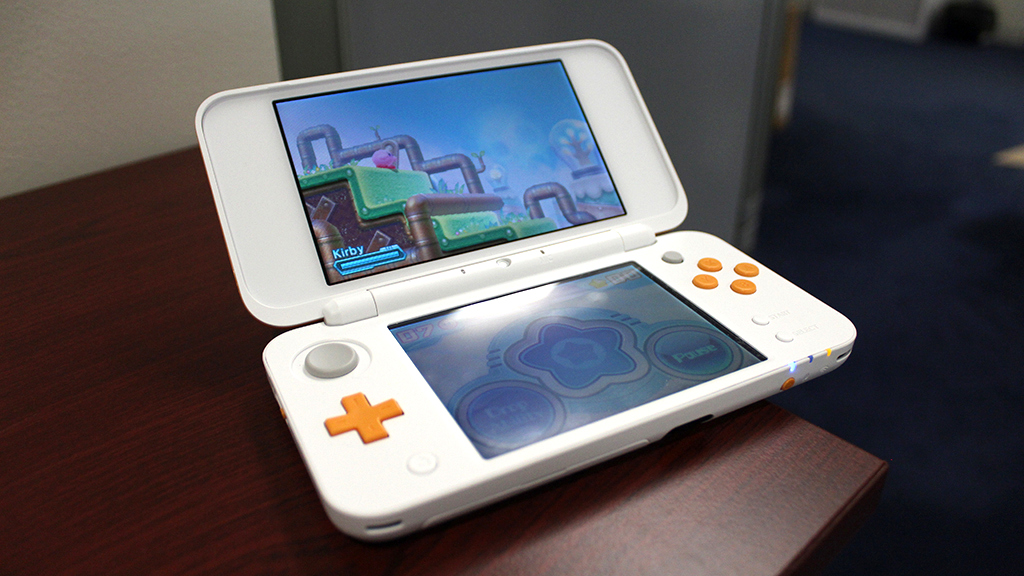 The New 2DS XL has a great new design that feels premium, and we love that Nintendo has squeezed XL-sized screens on such a sleek device. It's also great to have a proper clamshell 2DS system that keeps the price affordable.

A huge library of classic 3DS and backwards compatible titles, along with more great titles still to come, means that the New Nintendo DS XL is destined to keep players entertained for years to come.

We appreciate the device's large screens, however, the New 2DS XL's 240p screen is really starting to look rather ancient. When you can clearly tell apart individual pixels on your screen, even from a slight distance, it really makes this 'New' device feel a bit old.

The device's protruding hinge also means it doesn't feel quite as nice to hold in the closed position, and the top screen can also feel a little wobbly while open. 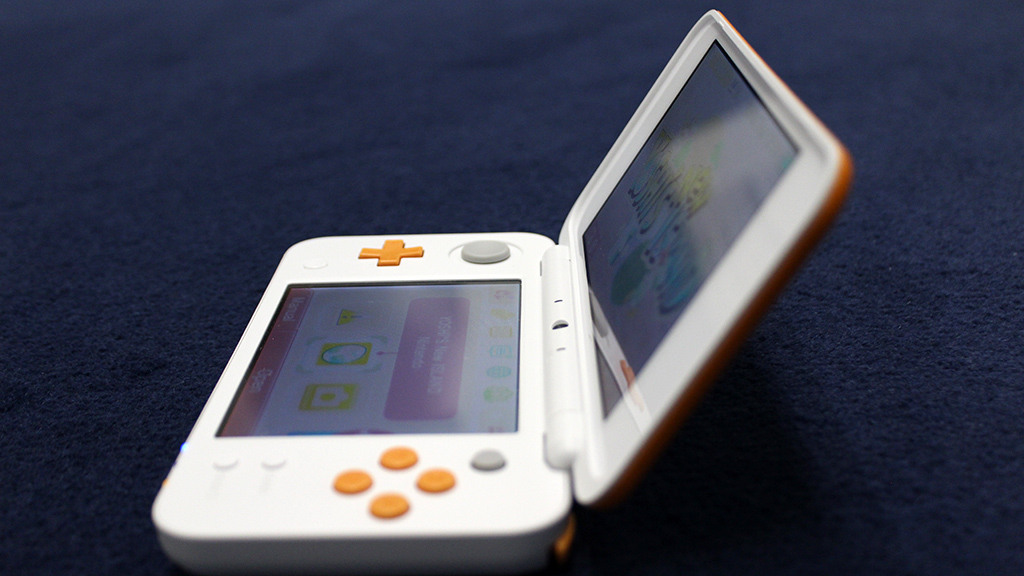 Now that Nintendo has an affordable clamshell version of its 2DS, one that includes all of the internal upgrades that came with the New 3DS, the company has the perfect entry-level handheld for playing its staggeringly-great library of 3DS games. Its low resolution screen might be incredibly dated in 2017, but truly great gameplay never goes out of fashion.