Motorola Razr flip-phones were iconic devices back before full-featured smartphones conquered the handset world – but that unforgettable design may make a flashy return with a new Motorola device that's set to be unveiled today (November 13) in Los Angeles, California.

We've heard many rumors about the new handset, allegedly called the Motorola Razr 2019: a folding phone that takes the old-school form factor and turns it into a 'clamshell'-type foldable phone.

The foldable phone battleground is getting more competitive with the finally-released Samsung Galaxy Fold on shelves and the Huawei Mate X coming soon. But while the latter are premium devices, the Motorola Razr V4 (another potential name following up on the original Razr V3) is expected to be one of the first 'affordable' foldables.

We've now heard the device is slated to launch November 13 at an event in Los Angeles, so it could actually go on sale before Huawei's much-anticipated device – and given that company's struggle to sell in the US market, Motorola's foldable might beat it in that market anyway. Whether the Motorola Razr 2019 matches the performance of existing foldables is something we'll only know when the new phone is unveiled.

Here's everything we've heard about the Motorola Razr 2019 so far, along with a wish list of what we want from it.

Update: Motorola is expected to unveil its Moto Razr 2019 device later today. Plus a leaked image of the Razr 2019 shows an unfolded device about the width of a regular phone, but certainly longer than most phones.

Motorola is hosting an event later today (November 13) where it's expected to be unveiling its foldable phone. TechRadar has been invited, alongside media from all around the world, to the event that is taking place in Los Angeles, California.

Several teases and hints in the invitations point towards the reveal of a foldable phone, and it would be very surprising if Motorola had such a device that wasn't the new Motorola Razr.

As for what it will cost, a Wall Street Journal report previously expected a starting price of roughly $1,500 (around £1,170, AU$2,010). That would make it far more expensive than most phones, but that’s not surprising given that it’s rumored to have a foldable screen.

It also sounds like Motorola and parent company Lenovo aren't expecting the Razr 2019 to be a mainstream device, with the WSJ report also saying that only around 200,000 units are likely to be made, and that in the US it's a Verizon exclusive.

How do we know the Motorola Razr 2019 is foldable?

The main thing we've heard about the Motorola Razr 2019 is that it will have a foldable screen. The first hint of that came from Lenovo’s CEO Yang Yuanqing, who, during MWC 2018, told TechRadar, "With the new technology, particularly foldable screens, I think you will see more and more innovation on our smartphone design.

"So hopefully what you just described [the Motorola Razr brand] will be developed or realized very soon."

Then, at MWC 2019, Motorola vice president and general manager Anthony Barounas, said, according to TrustedReviews:

“If you go around the stores today, for me the phones all look the same. It’s difficult to see if it’s a Motorola, or [another brand]. How we differentiate to the consumer, show them something really different, that’s where foldables comes in. And that’s where Motorola also has a very big investment. I can’t say much but we have one franchise that will have a very big impact there.”

So that's pretty much a confirmation that a foldable phone is in the works, though the Razr brand wasn't mentioned by name.

We've finally seen leaked images seemingly showing the new Motorola Razr 2019, and they're about what we'd expected, with a clamshell-like design and a screen (of possibly 6.2 inches) that folds in the middle.

That size would make it far more compact than the other foldable phones that we've seen so far.

Other details include an even smaller display on the front, along with a camera bump and what looks to be a button or fingerprint scanner. 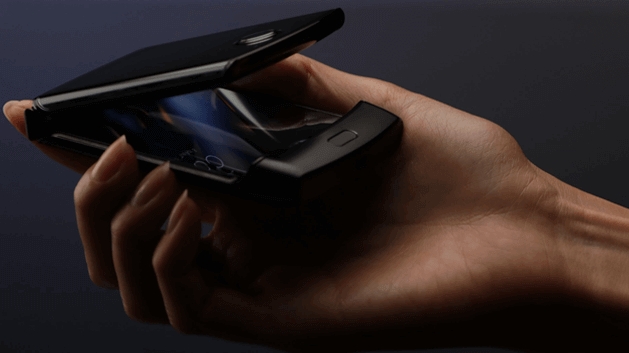 An additional image of the screen when fully open can be seen below, highlighting that there's no visible hinge.

Another supposed image of the Razr 2019 taken in the wild was found just a couple weeks before the phone's unveiling. It's no wider than most smartphones, but is far longer when unfolded – and while it's hard to make out, there doesn't seem to be a very visible seam in the screen where it will fold.

We've also seen patents pointing to a foldable screen. You can see images from the older patent immediately below and the newer one further down, but they both point to a clamshell design with a foldable display, much like the leaked images discussed above show.

However, while the older patent shows a large hinge and seemingly a gap between the two display halves, the other, newer patent (found by 91mobiles) shows a truly foldable display.

There's still a hinge, but this isn’t as visible when looking at the screen. This one also appears to have a smaller secondary display on the back of the phone, as we've seen in leaked images.

That makes some sense, as otherwise you wouldn’t be able to see a screen unless the phone was fully unfolded. The newer patent also shows a notch at the top of the screen.

The back also contains what looks to be a single-lens camera above the smaller display, and a fingerprint scanner on the lower section.

Another rumor supports the idea that the device has a secondary screen. It also details some possible features of that screen, saying that you might be able to use it to scroll through web pages that you're viewing on the main screen.

The secondary screen could also apparently be used to display notifications and a clock, to interact with Google Assistant when the main screen is closed, and to provide shortcuts to settings. It sounds then like it won't have the full functionality of the main screen if this rumor is right.

Another report revealed possible specs, as well as a logo (seen above, background filled in with black for clarity). The new Motorola Razr will supposedly pack a Snapdragon 710, either 4 or 6Gb of RAM and either 64 or 128GB of storage.

It also may have 2,730mAh of battery, though the source noted that last spec might be out of date. However, given that the Razr V4 looks to be a fairly compact phone (at least by foldable standards) it might not need a huge amount of juice to stay on.

Clearly, this would be a departure from other foldable phones, which so far have top-tier specs. And while previous rumors have revealed a somewhat cheaper potential price for the Motorola Razr 2019, it's still far beyond what today's non-folding flagship phones cost.

The silver lining, of course, is that the Motorola Razr 2019 might open up the door to mid-range foldables, that have weaker specs but lower prices. If you don't need cutting-edge processors and RAM to power foldable tech, perhaps we'll see more affordable folding devices sooner than we thought.

Rumors about the Motorola Razr 2019 are starting to roll in but we don't know everything yet, so we’ve come up with a list of what we hope it offers.

One of the reasons the Motorola Razr range was so popular was because of its slim, stylish design. Of course, the old models like the Motorola Razr V3, are dated now, but we’d like to see the spirit of the design carried on for the Razr 2019, but in a more modern form. We want a slim, futuristic handset.

The good news is that if the screen really does fold then it should at least be futuristic, though it might not be all that slim when folded shut.

There’s a worry that early foldable screens could be little more than a gimmick, but we hope that’s not the case with the Motorola Razr V4. Hopefully, the company will find a way to make it feel genuinely useful.

If Motorola successfully makes a screen that can change from phone to tablet size without feeling awkward then that would be a good start.

Any foldable phone is inevitably going to be expensive and rumors specifically suggest that the Motorola Razr 2019 will be pricey.

So we really want to get our money’s worth, by not just getting a foldable screen but also specs that can compete with the best of 2019 like the Samsung Galaxy S10 and iPhone 11.

We want all of our phones to have decent battery life, but this is of particular concern with foldable phones, as the larger screens could be a big drain.

So hopefully there will be an appropriately large battery in the Motorola Razr V4 to keep it going through the day and beyond.

Early rumors suggest this will be one very expensive phone, and we’d expect it to be too, since foldable screens are a new, likely pricey feature. However, for these devices to have remotely mainstream appeal the cost is going to need to be pushed down.

That probably won’t happen until the second or third generation of foldable devices, but it would be a nice surprise if Motorola (which is known in part for offering great value handsets) manages to make an affordable one on the first attempt.

6. Near stock Android with foldable features

One thing we love about most current Moto phones is that they use a version of Android that’s had little done to it, ensuring the software is polished, easily approachable and typically quick to get updated.

We hope the same is true for the new Motorola Razr. Or at least, for the most part. What we would like to see though are some software features that help you get the most out of the foldable screen. We’re not sure what those would be, but hopefully that’s something Motorola has given some thought to.

Being foldable is one thing, but we don’t want that to be the only thing the Razr 2019’s screen has going for it. We’d also like it to be a sharp, high-quality panel. And for it to be durable, because it’s going to need to be if it’s constantly being folded.