Earlier this year, MediaTek confirmed that it was working on a 5G chipset for mid-range smartphones. The much-awaited, internally called the MT6885, will be unveiled on November 26 at the company’s annual summit.

Back in July, when MediaTek unveiled the Helio G90 series of gaming chipsets, the company also confirmed that it was working on a 5G chipset for later this year, and will be its flagship chipset when it comes to the market. Additional details weren’t provided back then, but now the manufacturer has confirmed that the 5G SoC will be detailed on November 26 at the MediaTek summit. Some preliminary specifications were also shared. 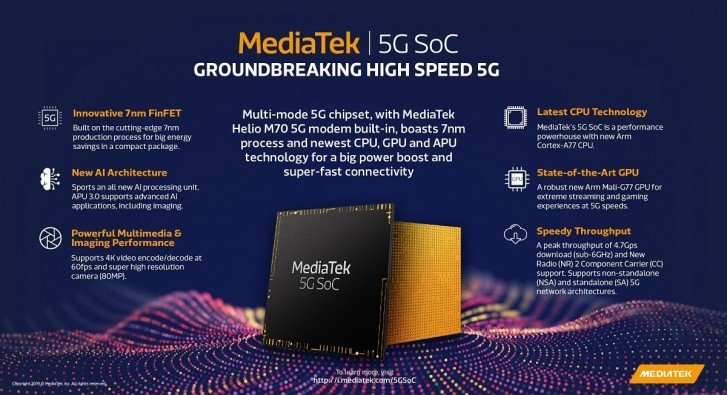 Everything you need to know about the MediaTek MT6885

The MT6885Z will be MediaTek’s most powerful chipset to date and will be 5G capable thanks to the Helio M70 modem. It is positioned to be one of the more affordable 5G chipsets when it comes early next year, which will be a boon for affordable flagships. A non-5G variant of the chip is also expected for markets such as India. Theoretical download speeds of 4.7Gbps (sub-6) can be achieved, and both non-standalone (NSA) and standalone (SA) 5G architectures will be supported.

It will be built on a 7nm FinFET manufacturing process, bringing better efficiency to the mix. The MediaTek 5G SoC will also sport the new ARM Cortex-A77 cores, which will do all the heavy lifting for the more demanding tasks. That will be supported by the new Mali-G77 GPU for high-quality streaming and gaming. A new AI architecture, called the APU 3.0, will also be present.

The other major leap comes with imaging, as the MT6885 can support 4K video encoding and decoding (recording and playback) at 60fps, and can support image sensors with resolutions as high as 80MP.

The chipset is already in mass production and will ship to OEMs in the first quarter of 2020. Xiaomi is said to be one of the first adopters of the MediaTek 5G SoC, just like it was for the Helio G90T chipset globally. The Redmi K30 series is rumored to be the first device to feature the MT6885 processor package and is expected to be unveiled in early 2020 as an affordable 5G flagship.