Huawei is no stranger to high-end tablets, but currently that corner of the slate market is dominated by Apple's iPad Pros, with top-end specs and a dedicated tablet operating system. It looks like Huawei is set to make another assault on the market though, as its new premium tablet, the MatePad Pro, has just leaked.

The leak comes from acclaimed leaker Evan Blass, who posted two simple tweets: one confirming the name 'MatePad Pro', the other a press render of the tablet complete with a keyboard folio and stylus. While we'd usually recommend caution with leaks, because they can often be wrong, Blass has a commendable track record.

The image of the MatePad Pro lines up with previous leaked renders, but at the time we thought they were of the MediaPad M7. The images look almost identical though, with the iPad Pro-esque design and a 'punch-hole' camera system.

The real big news here is the name: Huawei MatePad Pro. That shows Huawei is dropping its current tablet line, or at least its 'MediaPad' name, to bring its slates more in line with its computers and phones, like the Matebook 13, one of its newer laptops, or the Mate 30 Pro, its recent smartphone.

It's probably also no coincidence that the MatePad Pro is named similarly to the iPad Pro.

What is Huawei's new tablet?

The MatePad Pro looks to be a fairly thin tablet with a large screen, broken up by the front-facing camera which is in a 'punch-hole' cut-out in the top left corner, unlike other high-end tablets like the iPad Pro and Samsung Galaxy Tab S6, which have it housed in the bezel.

There's a keyboard folio and stylus, and it's not clear if both or either come with the device – the Galaxy Tab comes with a stylus but you have to buy the peripherals for the iPad Pro range separately. 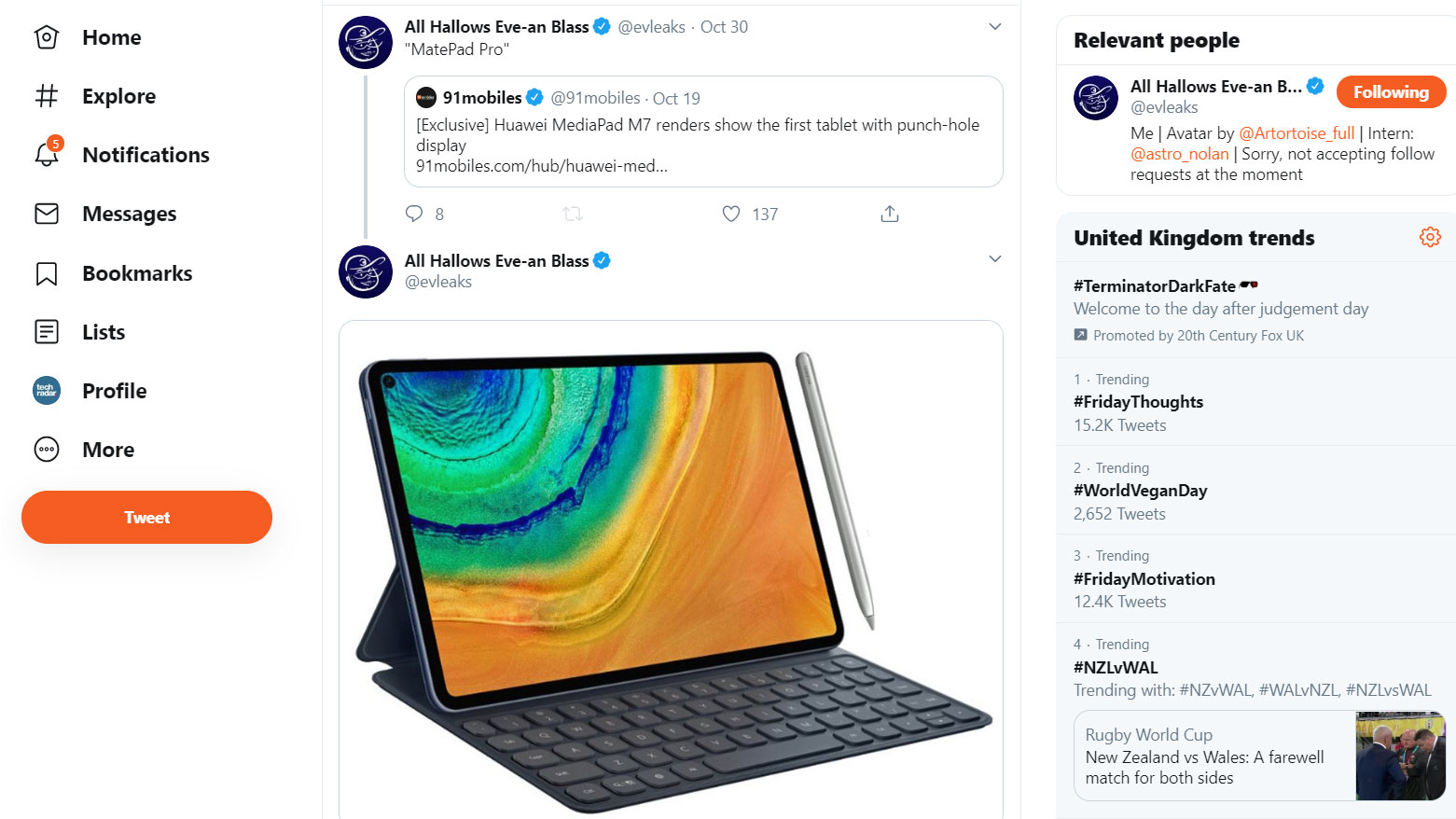 We don't know the internals of the MatePad Pro, but if Huawei wants it to stand a chance against its rivals, it's going to need the best specs possible. That means a Kirin 990 chipset, as that's the latest from the company, a battery pack that's well over 7,000mAh, and a decent selfie camera for video calling.

Then there's the question of the software, which we have to ponder every time Huawei launches a new device. Thanks to the Huawei ban, the company can't use any of the Google Mobile Services (GMS) including the Play Store, limiting the apps available on the devices, and it's likely that's the case with the MatePad Pro too.

Because of this, we'd expect the device to only land in China initially, as that country isn't gripped by the need for Google apps (as GMS isn't available in that country). However if the Android ban is lifted, we could see Huawei's devices repopulated with Google's apps, and on that day the Huawei MatePad Pro could be a valid contender for the title of 'best tablet'.

Or it might not. We'll need to get hands-on with it to find out for certain, and we don't even know for sure if it's a real device yet. When we hear either way we'll let you know, so stay tuned to TechRadar for all the latest phone, tablet, and tech news.