Today, JJ Abrams unveiled an all-new clip of Star Wars: The Rise of Skywalker inside Fortnite, with the footage debuting at Risky Reels inside the game. Luckily, you don't need to play the game to actually see the clip. It's been captured and uploaded online for your viewing pleasure.

Check it out below. You'll see Rey performing a Jedi mind trick on some First Order soldiers, in the company of Poe Dameron and Finn. The clip is roughly a minute long, but it'll help pass the time until Episode 9 releases next week:

The event was an impressive achievement by Epic and its collaborators. It actually kicked off with a Star Wars-themed set piece, as the Millennium Falcon circled Risky Reels in battle with some TIE Fighters. Geoff Keighley, who hosts and runs The Game Awards, then interviewed Abrams inside the game, before the clip was presented. Check out the video below for more on what it looked like in-game, starting at about two minutes in, for the highlights:

Fans who logged in to watch the event got an exclusive TIE Fighter-themed glider, which caused so much demand that Epic took to Twitter to address login issues, bumping the reveal by an extra ten minutes.

Finn, Rey and Sith Trooper uniforms are now available in Fortnite, too, which you might've seen a few times in the clip above. Take a look at them below: 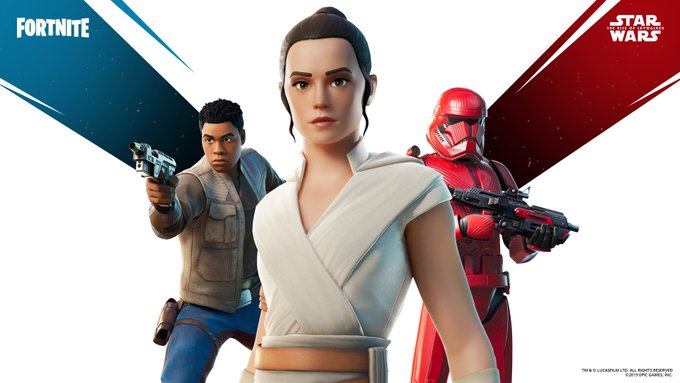 If all that has you excited about seeing the movie, Star Wars: The Rise of Skywalker is less than a week away. It'll be released in cinemas around the world beginning on December 19, and in the US on December 20.